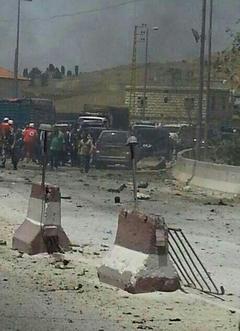 Lebanese officials strongly condemned a bombing that targeted on Friday an Internal Security Forces checkpoint in eastern Lebanon amid rising fears of renewed violence in the country sparked by a stunning offensive by Sunni insurgents in nearby Iraq.

Al-Mustaqbal Movement leader Saad Hariri called on “all Lebanese sects and parties to be vigilant and cautious and unite against the plot targeting Lebanon and the region, which only aims at inciting sedition.”

Hariri praised the ISF and all security agencies for their tremendous tasks during this stage.

Finance Minister Ali Hassan Khalil, who is also Speaker Nabih Berri's adviser, said that the state “is in an open battle that requires security forces to remain on guard.”

He pointed out that local unity has become a pressing demand.

In addition to the Bekaa blast, the Hamra area in Beirut was the scene of a major crackdown over a suspected terror plot on Friday, with security forces arresting 102 people at a number of hotels, among whom only 17 remain in custody.

The ISF said security forces had "obtained information that a terrorist group was plotting to stage bombings in the city of Beirut and other Lebanese areas.”

“Consequently, a joint force from the (ISF) Intelligence Bureau and the General Directorate of General Security raided a hotel in the Hamra area after suspecting that a number of dangerous individuals were in it,” the ISF said.

Former President Michel Suleiman slammed the “terrorist act” in the Bekaa, calling on officials to voice their support to all security agencies.

For his part, LF leader Samir Geagea denounced the blast, noting that "the region is boiling and Lebanon is not an isolated island."

"The first step to immunize Lebanon and spare it the incidents is to seek to restore its constitutional institutions – the presidency, parliament and government," Geagea said.

Accordingly, the LF leader called on the MPs "who are boycotting sessions dedicated to elect a new president to check their conscience, shoulder their national and historic responsibilities and head to parliament to elect a president, as they have been urged by the Maronite bishops."

Meanwhile, Free Patriotic Movement leader MP Michel Aoun urged the Lebanese to "show calm and further solidarity and to cooperate with security agencies to strike terrorism and foil its goals."

The Kataeb Party called for the immediate election of a president, warning that "what happened is a dangerous message aimed at dragging Lebanon into the game of death that is taking place in Iraq and Syria."

The March 14 general secretariat also denounced the attack, expressing solidarity will all security agencies and the cabinet of Prime Minister Tammam Salam.

“The March 14 alliance has continuously warned of Hizbullah's interference in the Syrian conflict,” said the secretariat, demanding the party to “immediately withdraw from the battles" in the neighboring country.

Lebanese Democratic Party leader MP Arslan deplored the blast, calling for supporting the interior ministry and allowing it to perform its missions through its security agencies, "which everyday prove their competency in busting terror cells."

this will go crescendo if Aoun is not elected...

it will... it is just to pressure MPs to vote for aoun and hezbis... wait and see the further developments!

there are things your binary mind cannot understand, i don't blame you , you are just intellectually very very limited...

aoun is a puppet, not controlling anybody, his iranian masters tell him what to say and do. Like the loyal poodle, sleiman frangieh-assad.

Little Sleiman Frangieh has made comments here on this incident. Yesterday he was quoted as saying that Bashar al Assad would select the next president of Lebanon. He has joined himself and the Marada party to Assad at the hip at a time when Assad and his regime are engaged in a sectarian conflict in Syria, made so by Assad himself, as a survival technique. It is a conflict brought on by and encouraged by Franghieh's erstwhile patron, the Assads.

And Frangieh has the nerve to comment on the consequences of his bad choices to the press? Condemning them?