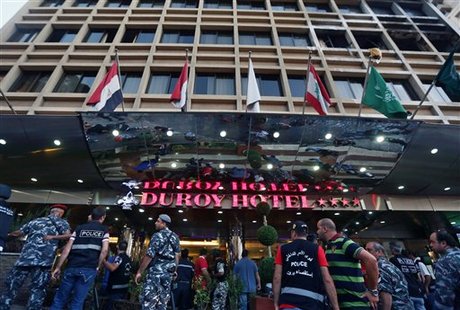 Saudi security officials are expected to visit Beirut to identify the suicide bomber who blew himself up at Duroy Hotel in Beirut's Raouche area on Wednesday, pan-Arab daily Asharq al-Awsat reported.

The newspaper quoted a Saudi security official as saying on Friday that the delegation would bring with it DNA samples to confirm the identity of the bomber.

The bomber detonated his explosives at his hotel room during a raid by General Security officers on Wednesday evening, and died in the blast.

Another accomplice was wounded and was being questioned at his hospital bed. He is also a Saudi citizen identified as Ali Ibrahim al-Thwaini.

A Saudi official told Agence France Presse on Thursday that al-Shenifi, 20, was wanted by the interior ministry.

But Asharq al-Awsat's source denied that al-Thwaini was also wanted by the Saudi authorities.

You, sir, are an ignorant bigot. No one deserves to die for having different political, religious, or economic beliefs. Or any other kind of beliefs. It's people like you from both political camps that will lead to Lebanon's destruction.

it's enough to see the volume to Trade we have with the kingdom, its direct contribution to the Lebanese economy, to the Lebanese diaspora making its living there and supporting their families in Lebanon, to the endless support they give to the Lebanese institutions (last of which the 3 billion$ to the army that fueled the thugs). it's enough to be objective for few minutes to realize that the kingdom of Saudi Arabia is a true ally to the Lebanon we want.
Now compare all of this with Iran, and let us discuss numbers.

God bless Lebanese freedom, sovereignty, independence, and democracy! No to the kingdom of terrorism and its evil schemes!

of course, the army should parade every bullet, vehicle, and weapon it gets in front of the iranian mowaten to get his approval. Go spread your sectarian propaganda else where!

who said they are beggars ? why do we have to dramatize everything we say ? KSA and the gulf region are giving people like you and me opportunities. a ray of hope for graduates to find their lives and finance their families back home.
you name financing the army a mockery, because you don't believe in any army or any other Lebanese institution. your comfort zone is where your hizb thugs flourish, where you can drive the way you want, fight with who you want, get your papers done in the ministries, all with your fellow hypocrite thugs.
KSA is the holiest Islamic land. if I were Muslim, I wouldn't have been happier to know that Islam is protected by true friends and believers of Lebanon as a concept.

Lies, delusions, and terrorism are a Saudi national pastime.

As usual, the fake mowaten aka crusher and many other aliases has nothing to contribute except insults, small talk, and attacking posters. Paid propagandist!

saudi must keep their pedo terrorists in their own country.
what a sick disgusting barbaric inhumane hateful society (im sure im missing about 100 terms to describe the wahabi-dome too)