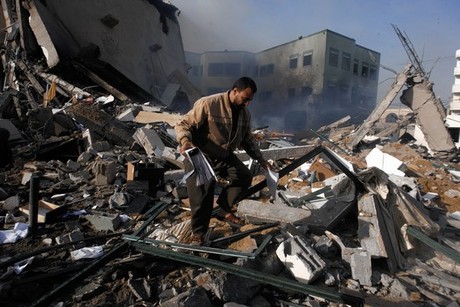 Egypt said Friday its efforts to halt violence in the Gaza Strip have met with "stubbornness", as it appealed to the international community to intervene to end the deadly conflict.

Israel's aerial military campaign targeting rocket-firing militants in Gaza has killed at least 100 Palestinians and wounded more than 500 since it began early Tuesday.

Egypt, which signed a peace treaty with Israel in 1979, played a key role in mediating ceasefires in past wars between the Jewish state and Hamas, the Palestinian Islamist movement that controls Gaza.

But Cairo has signaled a more hands-off approach in the latest conflict, at a time of mounting tensions between Egypt's new government and Hamas.

The foreign ministry said on Friday that the government was finding it difficult to resolve the latest violence.

"Egypt has communicated with all sides to halt violence against civilians and called on them to continue with the truce agreement signed in November 2012," the ministry said.

"Unfortunately, these efforts over the past 10 days have met with stubbornness, with only innocent civilians paying the price."

Egypt helped to broker the 2012 truce between Israel and Hamas.

On Wednesday, the ministry said Cairo was not mediating "in the common sense of the word" to end the conflict, but its diplomatic efforts were aimed at "immediately stopping Israeli aggression and ending all mutual violence".

It adopted a firmer line on Friday, hitting out at Israel for killing civilians by using "oppressive policies of mass punishment".

"Egypt rejects the irresponsible Israeli escalation in the occupied Palestinian territory, which comes in the form of excessive and unnecessary use of military force leading to the death of innocent civilians," it said.

"Egypt demands that the Israeli side adopt self-restraint... and keeping in mind that it is an occupation force, it has legal and moral obligations to protect civilians," the ministry said, and appealed to the international community to end the violence.

The continuing escalation of the conflict would not "create the suitable climate... for future negotiations to peacefully settle" the issue, it added.

southern
do not expect the new Egyptian leader to do anything meaningful. you can only expect a continuation of moubaraks policy which is no action