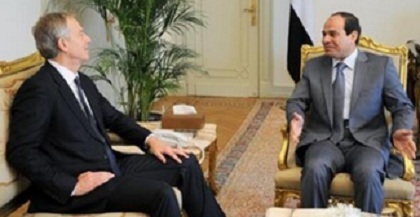 Egypt's President Abdel Fattah al-Sisi warned Saturday that escalating the conflict between Israel and Hamas in Gaza would cost more "innocent lives," as the death toll climbed to 127 Palestinians.

Sisi's spokesman said the government was in touch with both sides after the president met Mideast Quartet envoy Tony Blair in Cairo.

"The president warned of the dangers of military escalation, and the casualties it would cause among innocent civilians," the spokesman said in a statement.

Israeli air strikes on the Gaza Strip killed 22 people Saturday, bringing to 127 the toll on the fifth day of violence, medics said.

The air strikes are in response to Hamas rocket fire into Israel, which have not caused any deaths.