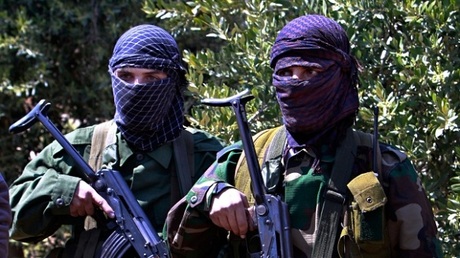 Hizbullah has sent reinforcements to several cities in Reef Damascus amid reports of a possible attack on the region by the Syrian opposition's fighters, the Syrian Observatory for Human Rights said on Saturday.

"Hizbullah continues to send reinforcements to areas in al-Qalamoun plains and to the surroundings of al-Zabadani (50 kilometers northwest of Damascus),” the Observer announced in a statement, noting that this might be part of a plan for an attack on the region by the Syrian regime's forces aided by Hizbullah.

Informed sources have told the Saudi daily Oqath that the bodies of three Hizbullah fighters have recently been transferred to Lebanon from the neighboring country.

The fighters had died in an operation launched by the Syrian rebels against party posts in al-Qalamoun, according to Oqath's article, which was published on Saturday.

"The losses of lives among Hizbullah fighters have increased significantly after the Syrian army retook control of al-Qalamoun,” the sources said, remarking that this might have been due to the geography of the region “especially in the Arsal al-Ward area which is difficult to completely seize.”

"Hizbullah leaders are now mapping plans to deal with the situation (in al-Qalamoun), especially amid fears of a possible large attack by Syria's opposition in the coming few weeks,” they added.

Fighting continued in al-Qalamoun between the Damascus regime forces, aided by Hizbullah, and the opposition's fighters despite the “fall” of the region in the government troops' hands.

In June, 10 Hizbullah fighters died while taking part in the ongoing Syrian war, most of whom were killed in an attack by the oppositions' fighters in the town of Rankous in Reef Damascus.

These reports were confirmed on websites affiliated with the Syrian opposition and with Hizbullah, which also revealed the fighters' identity.

Hizbullah had announced more than one year ago that its fighters are taking part in the ongoing war in neighboring Syria to defend the country against the Takfiri threat.

HA does not really care what happens to Lebanon, its economy, or its people. How can we have security in our country when this party sends its militants to fight and kill in another country. This is insane...!

The terror party openly sends its terrorists to Syria to commit atrocities against civilians in defiance of the dissociation policy and the Baabda declaration. They are taking the country to the brink of chaos to satisfy their paymasters' sectarian agenda in Iran. May they all perish and never come back.

"Informed sources have told the Saudi daily Oqath that the bodies of three Hizbullah fighters have recently been transferred to Lebanon from the neighboring country."

The more the merrier. Good riddance and please send more..

Please hear my prayer and send them all back in body bags. these are baby killers, and they deserve to meet with satan ASAP.

All preparations have been finalized in a new wing set up specifically and ready to receive this new group of warrior reinforcements.

Yallah HA pile it up and then complain about terrorism in Lebanon, Bravo!

This country is a joke, seriously. How do the LAF allow these terrorists to cross into Syria in full military armor. I read today there are more than 10,000 arrest warrants in Tripoli based on false vindictive informants and here our army allows HA to go to Syria unhindered.

Stop talking to yourself and loking your own posts... Where the 3asfooriyeh at, the schizo is on the loose again

And your point being?

I have a great idea. I think Syrian Resistance should ally with Israel.

I miss Mystic, I hope he has not been posting under a different name:)

he is with the 'resistance_m8' studying medicine.

Are we going to see HA forces deployed in Iraq to defend Shiaa holy shrines or are the ones in Syria the only Shiia shrines worth defending. Hipocracy has no limits with this party.

aren't you suppose not to smoke in Ramadan?