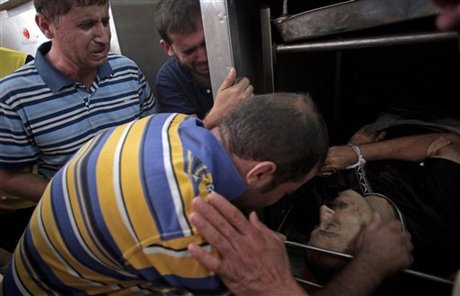 The U.N. Security Council urged Israel and Hamas Saturday to end their hostilities in Gaza, calling on both sides to respect "international humanitarian laws" and stop the loss of life.

In a unanimous declaration, the 15-member council called for a deescalation of the crisis that has claimed well over a hundred lives, and urged a return to the "calm and restitution of the November 2012 ceasefire."

The council expressed "serious concern" over the "protection and welfare of civilians on both sides."

It also called for a return to the negotiating table by Israelis and Palestinians "with the aim of achieving a comprehensive peace agreement based on the two-state solution."

The council issued its declaration amid news that eight more Palestinians were killed in a series of Israeli raids in the Gaza Strip on Saturday.

Those attacks raised to 135 the number of Palestinians that medics said have been killed since hostilities flared.

Gaza officials said nearly 950 people have been wounded in the strikes.

Gaza militants, meanwhile, have fired approximately 525 mortar rounds and rockets that struck Israel, but with no loss of life.

Israeli military officials say another 138 rockets have been intercepted by the Iron Dome missile defense system.

Israel has authorized the call-up of 40,000 reservists, and is threatening to initiate a ground operation.

We must congratulate Hamas on the accuracy of its rockets. Yesterday they hit the town of Beituniya near Bethlehem, and today they did even better. they hit Hebron.

We don't need comments by Israeli agents in our media when we are in a state of war with the enemy. Shame on An-Nahar for publishing such comments.

munjk1 - Why exactly does Lebanon regard Israel as an enemy state?

In the late 1980's Lebanon and Israel reached a peace agreement which was torn up by the Syrian then-occupiers of Lebanon. Why have the governments of Lebanon since then not tried to renew this agreement?
Neither side has territorial claims on the other, peace could bring about joint development and use of the naztural gas and oil fields in the Mediterranean, bringing an economic bonanza to both countries.
How much would Lebanon like to be in the situation where there are no regular electricity blackouts. What about tourism, with the possibility of Lebanese Moslems, Christians and Druze being able to visit their Holy Sites in Israel.
What exactly does Lebanon have to lose from peace ? - NOTHING