Nasrallah: Hamas Was Not Serious when it Called for our Help in Gaza 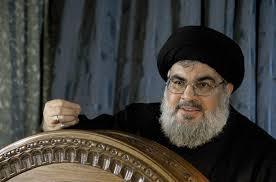 Hizbullah chief Sayyed Hassan Nasrallah stated that there are “no red lines” in the “security war” with Israel, reported al-Akhbar newspaper.

He told the daily in excerpts released on Wednesday: “Hamas was not serious in its call on Hizbullah for assistance in the Palestinian Gaza Strip.”

He made his remarks in an interview, with al-Akhbar, that will be published on Thursday and Friday.

Commenting on regional developments, Nasrallah said: “What we have prepared for Israel was not affected by our actions in Syria.”

"We are a resistance but they want us to be a Shiite party for Arabs, and as we defended the South, we will defend our entire country and our border with Syria,” he declared.

"Many of those who were opposed to us are starting to change their stances,” he noted.

On July 29, Moussa Abu Marzouq, deputy head of Hamas' political bureau, had hoped that Hizbullah will open a new front from southern Lebanon against Israel after it launched a campaign against Hamas in Gaza.

“The resistance in Lebanon has the capability to do a lot of things,” Abu Marzouq added.

Earlier in July, Nasrallah said his group will continue to stand by the Palestinian people and “all Palestinian resistance factions in Palestine.”

“We are following up on all the military and political developments of the battle and we tell our brothers in Gaza that we stand by them and will do everything that we perceive as duty ” to help them, he said.

It's israel who learnt not to mess with Lebanon. Before 2006 they used to bomb us almost every summer.

I don’t want to analyze, what matters are good intentions and understanding. Perhaps he believed the situation was difficult so he brought up the idea, but an issue of this importance and gravity should not be discussed through the media. That is why we did not follow up on the request in the media, because this issue – whether there is an interest to interfere directly or not – ought to be discussed between us."
2/2

As for Nasrallah's words, they were truncated here to lose their meaning. Here's what he actually said:

A: Had this request been serious, it would have been discussed within closed circles, not in the media. The lines of communication between us and Hamas were never severed, even during the period when it was said that our relationship regressed. The lines of communication exist and there are always contacts. He or one of Hamas’ leaders could have asked us to discuss the issue. But to bring it up in the media, in my opinion, raises questions and I did not find it appropriate.
1/2

yes Momo. Israel is shaking in its boots because of the glorious men of God are protecting all of us.
Stupidity- Knowing the truth but still believing the lie.

lol, of course, but when will you be serious about your claims of resisting and liberating Palestine.

To ex-fpm - nothing to liberate except from Arab jihadis using "Palestinians" as human shields and blocking all paths to peaceful coexistence.

Palestine has exposed them for the liars they are.

Hamas stabbed the Resistance in the back, and now they want them to forgive. It will never be forgotten, which is why i hope Hamas will take of use what it learned from the Resistance, to defend the civilians of Gaza. They take their orders from Qatar, even though Iran, Syria and Hizb supported them with everything.

Mystic,
........ i hope Hamas will take of use what it learned from the Resistance, to defend the civilians of Gaza. .........
Helicopter
....... Hamas learned a lot from HA, which is why the Civilian casualties in Gaza are so high while Hamas casualties are very low in comparison..........
THings Hamas learned from HA include but not limited to: Hide weapons in homes, schools and hospitals. Fire your weapons from dense civilian areas. Any bunkers and underground tunnels are strictly and exclusively for the fighters.

What bunch of nonsense from Mystic. Resistance to what and in support of what? This should prove beyond the shadow of the doubt that the resistance is not in support of Palestinians but in support of the Iranian sectarian project in the regime. Hamas could not bering itself to supporting a criminal regime that is slaughtering its people wholesale.

Yes, yes; we can see how Syria and the Hizb are supporting the Palestinians in Yarmouk. Ya ma7la Israel!

Funny that the same guys who criticize HA for fighting Israel and helping Palestinian resistance in the past are now criticizing them for not attacking Israel now. You're just a bunch of spineless losers w/ a lack of objectivity and rationality :)

Oh is that so? How come then that Iran and the Resistance still supports Hamas? With both weapons and funds. What i am pointing out is, that there are other resistance groups than Hamas, for instance Al Quds brigades, PFLP and others.

Only ones that does secret dealings to Israel, is Hariri, Geagea and your beloved Da3ish.

[1] Titan, thank you for your reply. You are right that HA is sectarian by its very nature because it is an organization deeply rooted in religious ideology, but this is a moot point considering every group in Lebanon today is sectarian.

[3] Saudi intelligence agencies are already known to cooperate with Israel, and Saudi's allies in the region already have OFFICIAL peace treaties with Israel - ie. Egypt & Jordan. It is more likely, in my opinion, that Saudi Arabia who also considers Iran to be a mortal enemy is the country with the "unofficial peace treaty". I hope you'll consider these points and try to think about what I said from an objective perspective. Cheers

[2] I would strongly disagree with your point on HA having a "unofficial peace treaty" with Israel. Let's further consider what you say, HA is a tool of Iran. If HA is a tool of Iran and HA has made a peace treaty with Israel that would mean also that Iran has agreed to this treaty. Now considering this why does Israel with all of its political power and lobbyist groups in the USA and European nations continue to make it a priority to push sanctions on Iran, assassinate nuclear scientists, and sabotage nuclear plants with computer viruses? Why is it that Israel and Iran are essentially mortal enemies, yet they have agreed to a regional peace treaty? I don't think that makes much sense and it is much more complicated than the way you believe it to be.

drew if Iran and HA view their "war against Sunnis" more critical than their war against Israel than why did they fight Israel in the first place? HA is not fighting a "war against Sunnis" unless you consider all Sunnis to be associated with Al Qaeda. Let's get something straight here, there are 3 armed groups in Syria. 1) The official Al Qaeda (Jubhat al-Nusra), 2) The renegade Al Qaeda (ISIS), and 3) The generic Al Qaeda (referred to as "moderate rebels"/"Free Syrian Army"/"Islamic Front").

Mystic stop your lies, what weapons and funds?

@m1keyless: you seem to have the "key" to the problems in the Orient.

@cold-man: thank you and if you'd like to discuss some of my points or share some of your own that would be nice :)

oh well, it seems the forum just added another spammer full of himself.

Why is hiding behind the chair? (photo)

the palestinian resistance prefers to cut the heads of shias off more then anything else. so hassana must start using his ticker, hamas wants him dead as well as the shias. takbeer, remember.

This might be hard to believe, but I think even Naharnet is ashamed to have you post on here.

How's the weather in Tel Aviv?

Did you get to sell a lot of falafel sandwiches today?

Thank you Hassan Nasrallah, because your declaration about Hamas being not serious in involving Hizbullah in the gaza situation is the best insurance for lebanese safety. I'm Italian, I have a daughter living with her mother in Lebanon, and every time my daughter finshes her holidays with me in Italy I always fear her coming back to your country, unstable, full of anger, full of fear about the future, terror about the past and denial about the present, full of persons who cannot laugh, cannot cry, because they are afraid to have a real emotion, afraid of where a real emotion could lead them... I get easier when I read yout declarions, because I understand that you really care about the future of your country, not only shia, but the whole country, and even though you are the chief of the most powerfull army of the Middle East, you're wise and you know that sometimes strenght resides in "peace" and not in "war".

Good question. It's too bad that people vote comments up or down based on what they believe their political affiliations are rather than the content of the comments themselves.

It could be that some people don't comment and just vote.

seems you have the "key" to the voting mystery:)

Now THAT is the real mystery.

hamas has always been known to have a good sense of humor. Of course they were only joking when they asked for his help. why would they need his help? they have the upper hand after all!

Stupid HA, join Israel now and fight radical Sunni takfiris. You are wasting your time on the BS "resistance" against a country which will never initiate an attack on a peaceful Lebanon. If you are foolish enough to attack Israel now ISIS will kill you, rape your women, and kill your kids. You Arabs never learn...

Hamas were not serious in their request for HA assistance. I bet that helps you justify your lack of rhetoric on the subject hussouny. It can also be said you were not serious in offering your support for Hamas also. This however is a good thing since you are Lebanese and abide by the States decision and succumb to its authority.
As for securing the borders with Syria it does appear a little late for this as it was your government who refused to close the borders and still refuse to deploy UN troops along Syrians border. And please hussouny don't talk about your duty, these instructions are outside your control you will be given your orders from Iran in due course depending on their negotiation requirements.

Bashar Al Butcher didnt even have to call for Hezbollah to come. They came when he whistled...

Obviously it was the other way around, Narallah wasnt serious when he offered Hamas help....

As the lead blogger here wrote, pure unadulterated BS from this guy. The fact is that his fighters are so thinly stretched in Iraq and Syria that he doesn't have enough of a force on the ground in Lebanon to do much of anything, much less hold off an Israeli ground force coming in. So he will not prick the Israeli beast, not now, not for any reason.
In fact, HA is so thin in Lebanon now that it couldn't pull off a May 7, 2008 again even if it needed to.

Beiruti lucky for HA that its haters are so weak and retarded, that's why its always victorious, say whatever makes you sleep better at night.

Its actually a nice and helpful piece of information. Im glad that you shared this useful information with us. Please keep us up to date like this. Thanks for sharing. gcdkcagffeek