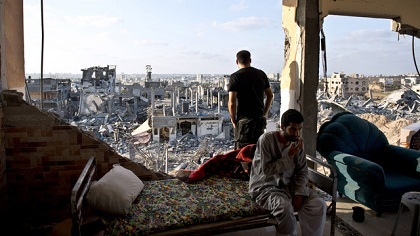 Israeli and Palestinian negotiators in Cairo on Tuesday agreed to schedule new talks on a durable Gaza ceasefire for the last week of October, a Hamas official said.

A delay in the talks after their first Egypt-mediated negotiations since the end last month of a devastating 50-day war in Gaza had been expected, because of upcoming Jewish and Muslim holidays.

The Palestinian delegation, which includes rival factions Hamas and president Mahmud Abbas's Fatah, will remain in Cairo this week to discuss resolving their own disputes.

"We finished the indirect negotiations... it was agreed to resume them in the last week of October," senior Hamas negotiator Ezzat al-Rishq wrote on his Facebook page.

Egypt's foreign ministry said the next round of indirect talks would be held in the second half of October in Cairo.

During Tuesday's talks "both sides agreed to commit to the truce and have presented their suggestions for discussing pending issues," the ministry said in a statement.

The talks were almost derailed earlier on Tuesday as Palestinian negotiators threatened to pull out after Israeli soldiers killed two suspects in the June murder of three Jewish teenagers in the West Bank.

That incident shocked Israel and led to weeks of simmering violence culminating in the war between Israel and Hamas militants in Gaza which killed more than 2,140 Palestinians, most of them civilians, and 73 on the Israeli side, mostly soldiers.

The war ended on August 26 with an agreement to hold future talks on Palestinian demands to end an eight-year blockade of Gaza and exchange prisoners in Israeli jails for the remains of Israeli soldiers killed in Gaza.

Rishq said the Palestinian negotiators in Cairo proposed that the talks in October center on reconstructing Gaza and setting up an airport and port in the Mediterranean enclave.

Israel has insisted that Hamas, which possesses a considerable arsenal of short- and medium-range rockets, disarm.

The July-August war caused a vast amount of destruction to homes and infrastructure in densely populated Gaza, leaving more than 100,000 Palestinians homeless in the long term, according to the United Nations.

Cairo is set to host an international donor conference on October 12 on reconstruction, amid warnings that the Palestinian Authority should manage the work and the funds allocated to it, urging Hamas to hand over power in Gaza to the PA.

Hamas, an Islamist militant movement designated as a terrorist group by the United States, Israel and the European Union, will also hold separate negotiations in Cairo with Fatah representatives on Wednesday and Thursday.

The factions formed a unity government in June to end a seven-year rift during which Hamas seized control of Gaza, and the Islamists remain the de facto rulers of the coastal enclave.

The talks in Cairo will focus on the transfer of power in Gaza to the national unity government and on security there, a member of the Fatah delegation said.

They are also expected to address withheld salaries for Hamas civil servants in Gaza, one of the main stumbling blocks to implementing the reconciliation deal.