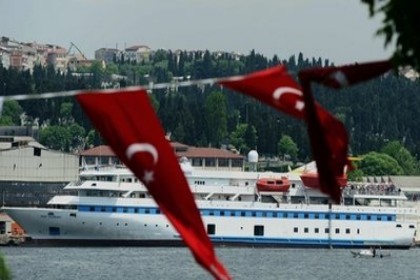 U.S. Secretary of State Hillary Clinton here on Monday urged Turkey to defuse tension and repair strategic ties with Israel as Washington values them both as allies, U.S. officials said.

Washington has expressed mounting concern about the bitter row between Turkey and Israel over a May 2010 Israeli commando raid on an aid flotilla heading to the Gaza Strip that left nine Turks dead.

In her meeting with Turkish Foreign Minister Ahmet Davutoglu in New York, Clinton "made clear that this is not a time when we need more tension, more volatility in the region," a senior US official said on condition of anonymity.

The United States has offered to mediate an end to the Israeli-Turkish crisis -- which analysts said could also harm ties between NATO allies Washington and Ankara -- but Davutoglu has rejected the US offer.

Washington stressed that the countries are "two close friends and allies of the United States, and urged them to keep the door open," another U.S. State Department official told reporters.

It asked Turkey to "avoid steps that would close that door, and on the contrary to actively seek ways that they can repair their important relationship with Israel," the official said.

"It's not really for us to structure the detailed path forward in the way Turkey and Israel are going to relate to each other," the official said.

"We want to be helpful if we can but ultimately they need to talk to each other," the official said, adding it is not for Washington "to write the plan."

Israel and Turkey have been locked in a bitter dispute since May 2010 when Israeli naval commandos stormed a convoy of six ships trying to reach the Gaza Strip in defiance of an Israeli naval blockade.

The United Nations criticized Israel for using "excessive" force in the 2010 raid, but upheld Israel's right to impose a naval blockade on Gaza. Israel has refused Turkish demands for an apology.

The United States and Turkey are long-time NATO allies.

However, Ankara is now pursuing a more independent course that is putting it at odds with Washington: its hard line over the Cyprus problem, its softer line on Syrian President Bashar Assad, and its late support for Libya's rebels.

The U.S. official said the United States supports "the right" of the internationally-recognized government of Cyprus to explore for energy off its shores amid a dispute with Turkey over such exploration.

Turkey has repeatedly called on the Republic of Cyprus to postpone its gas exploration, saying it has no right to do so while the island remains split, thus leaving the Turkish Republic of Northern Cyprus -- which is only recognized by Ankara -- out of the picture.

On the positive side, U.S. officials said Turkey has agreed to host a radar for the reconfigured NATO anti-missile shield in Europe, which is designed to counter future missile threats from Iran.