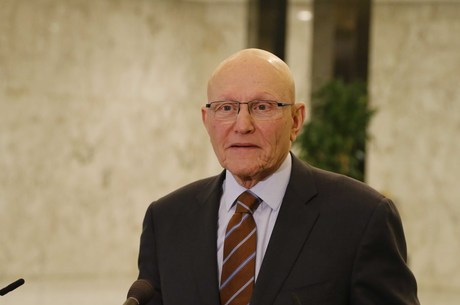 Prime Minister Tammam Salam said Sunday he was ready to meet with members of a growing movement protesting the country's trash crisis, and admitted that "excessive force" had been used against demonstrators.

Salam’s comments came in a press conference he held against the backdrop of Saturday’s clashes between security forces and activists of the anti-garbage demonstrators in Downtown Beirut.

He said that he stood "with the people and with the citizens."

Addressing the protesters, he said he extended his "hand to civil society. I'm ready to listen to you and sit with you."

“Lebanon and the people are passing through very difficult times which compels the necessity for each to shoulder responsibility,” said the PM.

He emphasized that the clashes that left scores injured “are a huge responsibility,” pledging to hold accountable those "responsible" for using "excessive force against civil society and against the people."

“What happened yesterday was the result of accumulating matters that have been building up and increasing the people’s suffering as the result of the vacuum we are living,” he stated.

He assured that the incidents will not pass without accountability, adding “I have no cover for anyone.”

Salam also warned that if the cabinet failed to convene productively on Thursday, then there is no need for it in the first place.

He blamed all political parties for the cabinet obstruction and the presidential vacuum saying: “I have always warned that this incapability will accumulate negativity in the country. I have been tolerating all this for the people’s sake.”

“My patience is limited and it is linked to yours,” he said as if referring to a possible resignation on his part if the street protests went completely out of hand.

“Our country is going backwards while other countries are progressing.

The Lebanese citizens have been patient for long, watching all countries achieve progress while Lebanon is deteriorating,” he stated.

“I have always been frank and open. I am a citizen too. I have never sought for positions but always tried to support them.

“I have called for a cabinet session on Thursday that will address pressing issues and the living matters as we approach the school season and a number of entitlements. If that convention failed to achieve the desired results, then there is no need for the cabinet in the first place,” he indicated.

“I continue to bear the responsibility for your (the people) sake. But my patience has limits.

“I call on you people to stand in the face of those who mean harm. I call on the civil society to form a delegation and put our hands together to discuss any issue there is. I have nothing to hide,” concluded Salam.

However, You Stink issued a statement following Salam’s speech calling on the PM to submit his resignation. “We demand that Salam submits his resignation and that the aggressors are held accountable.”

They also called for a massive demonstration today at 6:00 pm.

Police clashed on Saturday with anti-garbage demonstrators and used tear gas and water cannon to disperse them in downtown Beirut's Riad al-Solh square and to stop them from moving towards the nearby Nijmeh Square, leaving scores of protesters injured.

However, the demonstrators stayed in the area and urged all the Lebanese people to join them but anti-riot police opened fire in the air and used baton charges.

The demonstrators erected tents near Martyrs' Square, vowing to stay there until police release several activists they arrested during the protest.

What a coward...what has he be doing for the last 12 months ??? Why he does not agree to release the municipalities funds ? Why is he not firing the Minister of Environment who did NOTHING ? What did he do regarding the Naame landfill that is expected to close since 1 year ? He is useless and the people of Lebanon are requesting for early elections before anything else.

We want early elections and fire this bunch of thieves who are not happy anymore with their share of Sukleen and wanted more.

Mr. Salam, have some dignity..resign and organize parliamentary elections now !

There will be no cabinet sessions.

Let Israel come and sort this out. We will be much better off.

very easy to blame the others...he should resign and organize early elections if he has some dignity left.

Why the citizen cant have a say in this country ? Stop blaming others, we all know that the whole reason was that he did not get his slice of the cake...

What a shame, we want elections !

Your comment simply highlights the EXACT problem...March 8 or March whatever...the basic thing is that this current structure is simply not working and has been deteriorating the country for years now - yet you still stand behind your 'side'. Neither side is innocent, and nether side cares for the collective Lebanon and its the two together that have caused this chaos .... Time for something new!

kudos for pointing that out mowaten, it's good to see that not all hezbollah secular supporters embrace those trolls and their filthy language.

@ Tic tock nock nock: "Tasrif A3mal" since there is no President for the luxury of calling for a new cabinet!!! Ok Mr. Nock Nock ?
In "Tasrif A3mal" he will not hear bassil or abou sa3b and still get things running ;) better for him.

Salam is caught between a rock and a hard place.

Salam has lost his ability to help resolve the situation at this point. He really should resign. I know the Saudis don't like it but you need free elections and rule of law or your Civil Society will deteriorate until you have Civil War, riots, rotting garbage and gunmen everywhere. Better wake up.

Ebola and Caporal have paralyzed the whole country. We have been repeating it 1000 times.

Ebola and Caporal have paralyzed the whole country. We have been repeating it 1000 times.

He said that he stood "with the people and with the citizens."

What nerve! LOL. Well Salman the people and the citizens have got news for you: they're not standing on your side!

“Lebanon and the people are passing through very difficult times which compels the necessity for each to shoulder responsibility,” said the PM.
That's EXACTLY what the people is asking for, the difficult times we're passing through are due to your incompetence, ill-will, or combination of both. Tammam you have been holding the two most powerful postions in Lebanon for a year now, PM and President, more power than anyone every had, and what have you done with it?

"I have warned that I would resign but the people’s will prevented me."
Huh!? What people's will? Did I miss the rallies in your support? The people calling out your name and begging you to stay? Or maybe it's you who missed the ones where the people is saying GET THE HELL OUT.

Shoulder your responsibilities as you preach, recognize your failure and resign. Nobody will cry for you if that's what you're worried about.

The Parliament is next, the bunch of decrepit failures and their chldren who inherit their seats when they dont extend their own mandates has exceeded our patience. govt and parliament are useless, let's kick them out and make a new constitution, tabula rasa. The army can handle the transition, at least there are some men of honor there.

better that than have this parliament extend itself over 5 generations.