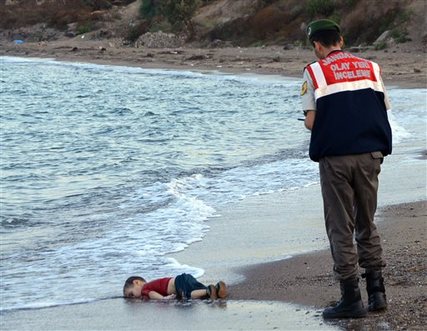 Harrowing pictures of a drowned Syrian boy washed up on a Turkish beach brought home the horror of the escalating refugee crisis Thursday as Europe was accused of letting the Mediterranean become a "cemetery" for migrants.

Turkey's President Recep Tayyip Erdogan bluntly blamed EU states for the death of every single migrant who lost their lives making the perilous journey to Europe.

Hungarian Prime Minister Viktor Orban also lashed out at Germany over its handling of the crisis as scenes of chaos erupted in his country.

The deep rifts in Europe were highlighted as Orban held urgent talks with the European Union's top officials in Brussels over worst crisis of its kind since World War II.

After seeing the "horrifying" images of the boy, Spain's prime minister urged the world to act to end the Syrian war, and his Italian counterpart said Europe cannot just be emotional about the deaths of people seeking refugee from war and persecution.

"Faced with these images which tear and move the hearts of every father, we must be aware that we need a global strategy and Europe cannot lose face," Italian premier Matteo Renzi said.

In scenes that underscore the desperation of the migrants, hundreds rushed Budapest's reopened station to catch a train that was later stopped on the way to the Austrian border and unloaded near a refugee camp.

"The problem is not a European problem, the problem is a German problem," the Hungarian premier told a press conference with European Parliament President Martin Schulz.

Orban said German Chancellor Angela Merkel had insisted that no refugees could leave Hungary without being registered there first, in line with "clear-cut" EU rules that asylum seekers' claims must be dealt with by their initial country of entry.

“Nobody wants to stay in Hungary, neither in Slovakia, nor Poland, nor Estonia. All want to go to Germany. Our job is just to register them."

Hungary has faced criticism for erecting a fence on the border with Serbia, as well as for refusing to let migrants board trains to Germany, the main destination for many.

EU president Donald Tusk called on member states Thursday to share the resettlement of at least 100,000 refugees -- far above the current agreement on 32,000.

And Merkel said France and Germany had agreed that binding migrant quotas were needed.

"Referring to Christianity in a public debate on migration must mean (showing)... humanity to our brothers," Tusk said.

The EU is riven by frictions between transit nations where the migrants arrive by sea or land -- mainly Greece, Italy and Hungary -- and those where they hope to seek asylum, mainly in northern and western Europe.

Pressure for change was increased by the images of the drowned child, seen in photos in a red T-shirt and blue shorts and lying dead in the surf at one of Turkey's main tourist resorts.

Identified as three-year-old Aylan Kurdi, the boy is believed to be one of least 12 Syrians who died when their boats sank trying to reach Greece.

Reports said his family were trying to get to Canada from the Syrian flashpoint of Kobane after fleeing to Turkey last year to escape Islamic State extremists.

The bleak image spread like lightning through social media and dominated front pages.

"Tiny victim of a human catastrophe," said Britain's Daily Mail -- which had previously spoken of a "swarm" of migrants trying to get into the country -- while Italy's La Repubblica tweeted the words: "One photo to silence the world."

It also prompted a furious reaction from Erdogan, whose country's efforts to join the EU have been stalled for years.

"European countries, which turned the Mediterranean Sea -- the cradle of ancient civilizations -- into a migrant cemetery are party to the crime that takes place when each refugee loses their life," he said in a speech.

Europe is facing a huge influx on all sides, with more than 350,000 people crossing the Mediterranean in flimsy boats this year alone, the International Organization for Migration says.

But momentum is shifting to the western Balkans due to the danger of the crossing, and Hungary has seen some 50,000 enter the country in August alone, most of them trying to get to western or northern Europe.

The train that left Budapest bound for towns near the Austrian border was halted and hundreds of migrants taken off to be bussed to a nearby refugee camp, state news agency MTI reported.

But a large number were refusing to leave and many angrily protested, shouting "Germany! Germany!" and holding placards saying "Help" and "SOS".

Hungary had allowed several thousand to board trains bound for Austria and Germany on Monday, but the following day the station was closed to anyone without an EU passport or a valid visa.

The move left around 2,000 men, women and children stranded around the station or in a makeshift refugee camp and scuffles broke out between police and migrants on Tuesday.

In the Czech Republic, police were criticized for marking the hands of refugees with numbers after detaining them on a train, in a grim echo of Nazi Germany's practice of marking the arms of concentration camp prisoners.