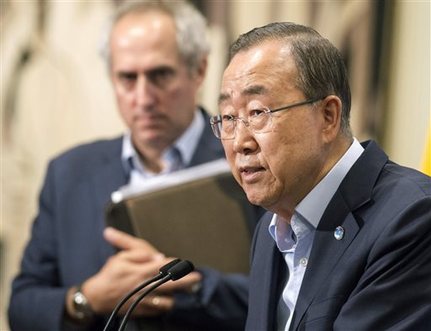 U.N. Secretary-General Ban Ki-moon has praised Lebanon, Jordan and Turkey for taking in millions of refugees from the war in Syria, which is now in its fifth year.

“Lebanon is hosting Syrian refugees equal in number to 25 per cent of its population,” Ban told a news conference on Wednesday less than 10 days before world leaders gather at the U.N. Headquarters in New York for general debate of the 70th session of the General Assembly.

“Jordan is also a major per capita host, providing shelter to Syrians equal to almost 10 per cent of its population,” he said.

“I commend those countries that are admirably doing all they can for people in need,” he told the news conference.

The U.N. chief cited Germany, Sweden and Austria "for opening up doors and showing solidarity" and applauded Britain and Kuwait for providing financial aid to address the refugee crisis.

But he made clear that other European countries were lacking in their response.

"I ask those standing in the way of the rights of refugees to stand in their shoes," he said.

"This is natural. It is what any of us would do for ourselves and for our children."

Yet Europe & the West complains, Lebanon is the country with most Syrian refugees in the world.

Europe and America should atleast take 20% of them, then it would be fair. The poorest Syrians lives in Lebanon too.

Europe and America ? You mean the Gulf countries and the Arab world who stands idle and is so selfish !

Wouldn't it be fair if you were to admit it is a martyred iranian jihadi terrorist family in your avatar?

Mystic; Secular Iran is fighting in Syria alongside Assad the 'hero' to free the Syrians from 'terrorism'. It would only be fair if Iran took 80% of the refugees until the fight is over and Syria is free. Wouldn't you agree?

aren't there direct flights from beirut, istanbul, and baghdad to Tehran?

Gulf Countries wont take any, they are too busy sponsoring wars in Syria, Iraq and Yemen.

Otherwise you are right, the refugees and the war in Syria are on the Gulfs hands, aswell as the Western world.

And Iran won't take any for the same reason. The Western world was not supporting Baschar in the mass-murder of his own people.

Yeah, but Europe and the West did not come into Syria from across the border to kill innocents.

They are mostly going to Europe, already there are clashes at border areas in Hungary, the Balkans etc.

Europe might have a civil war on their hands soon enough, but they can blame themselves for meddling in Middle Eastern affairs.

Don't worry about European civil wars - the worst that will happen is that the refugees who fled Baschar's murder machine will live in internment camps for as long as Baschar continues killing. Maybe Daesh's murders are more spectacular and headline-grabbing, but they are far, far fewer than the mass-murders committed daily by Baschar's regime quietly against Syrian civilians.
However, the same cannot be said about Lebanon: we are far closer to a new civil war. And we can't blame ourselves, because it was a Syrio-Iranian terrorist militia stationed on our land that has brought this on us.