Total of 7 Detained over Istanbul Attack 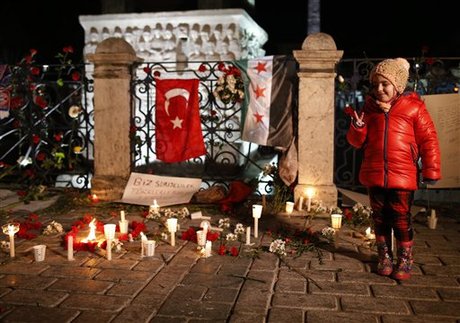 Turkey has arrested a total of seven suspects over a suicide bombing blamed on the Islamic State (IS) group that killed 10 German tourists in Istanbul, the Turkish interior minister said Thursday.

"Our operations are continuing. The number of those detained so far has risen to seven," Efkan Ala told Turkish ambassadors gathered in Ankara.

Ala said the figure included five previously announced arrests: four who were detained Wednesday in relation to the attack and one who was detained on Tuesday evening.

He didn't give any details about the two new detentions.

A 28-year-old Syrian member of IS blew himself up Tuesday in Sultanahmet Square, home to Turkey's most visited historic sites, including the Ottoman-era Blue Mosque and the Hagia Sophia, a former Byzantine church that was turned into a mosque before later becoming a museum.

Authorities said the bomber, identified as Nabil Fadli, had recently entered Turkey from Syria but was not on Turkey's watch list of suspected militants.

The blast left 15 people wounded, most of them Germans.

Turkish security forces over the last few days also rounded up over 70 suspected IS members across the country, but it was not clear if any were directly connected to the Istanbul attack.

Turkey has in recent months stepped up the fight against IS after several deadly attacks blamed on the group, including a double suicide bombing in October in Ankara that killed 103 people.