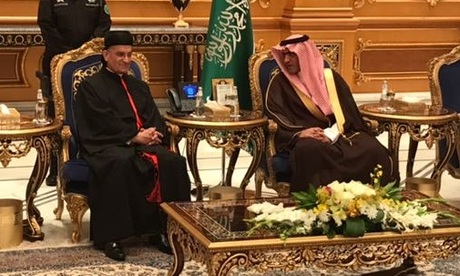 Maronite Patriarch Beshara al-Rahi kicked off a trip to Saudi Arabia on Monday where he is scheduled to hold talks with King Salman bin Abdul Aziz, Crown Prince Mohammed bin Salman and Lebanon's Prime Minister Saad Hariri who has been in Riyadh since his shock resignation on Nov. 4.

The patriarch was welcomed at the airport by Saudi State Minister for Gulf Affairs Thamer al-Sabhan, who is in charge of the Lebanese file.

Al-Rahi said the return of Hariri back home from Saudi Arabia, where he recently announced his resignation, will restore normal life to the country that was shaken by his move.

He told reporters before departing to Saudi Arabia that the Lebanese people have been "unsettled" since Hariri's resignation earlier this month, adding that he will raise the matter with the Saudi king and crown prince.

Al-Rahi heads the Maronite sect, Lebanon's largest Christian community and the Middle East's largest Catholic church, which enjoys wide influence in the country. His visit is the first by a Maronite patriarch to the kingdom ever.

"We will carry these concerns to the king and crown prince and wish well," he said.

Al-Rahi and Saudi Charge d'Affaires in Lebanon Walid al-Bukhari said the kingdom is not likely to deport Lebanese citizens as part of the current escalation with Hizbullah and Iran.

The kingdom has been demanding that Hizbullah play no role in future government, accusing the group of supporting anti-Saudi Yemen rebels known as Huthis. Hizbullah and the Huthis deny that the Lebanese group is carrying out anti-Saudi activities in Yemen.

Hariri's office said he met several diplomats in Riyadh on Monday including British and German ambassadors.

Ecclesiastical sources told al-Joumhouria daily that Rahi “carries in his visit the concerns of Lebanon to the Saudi leadership."

"When the invitation was made to the Patriarch the situation was different, so new elements and talks will be introduced to the discussions related to the post-resignation period,” the sources added.

Hariri resigned as premier in a televised address broadcast from Saudi Arabia by the Al-Arabiya news network, amid reports that he is being held against his will in Riyadh.

Hariri's sudden resignation announcement cited the "grip" of the Iran-backed movement Hizbullah on Lebanon, and also said he feared for his life.

The shock resignation announcement raised fears that Lebanon -- split into rival camps led by Hariri and Hizbullah -- could once again descend into violence.

It also raised questions about the fate of Hariri, who also holds Saudi nationality, as it coincided with the announcement in Saudi Arabia of an anti-corruption purge in which dozens of princes, ministers and businessmen have been rounded up

The Church sources added on condition of anonymity: “The Maronite Church is well aware of Riyadh's keenness on Lebanon. The Lebanese-Saudi relations have always been distinctive. All that it wishes is that relations return to normal unaffected by regional conflicts. Bkirki strongly supports the neutralization of Lebanon from wars and crises.”

As questions about Hariri's fate mounted, the resigned premier made a televised appearance on Sunday and said that he will return to Lebanon "within days" and that his surprising resignation was aimed at creating a “positive shock.”

Fake account # 97^ point is you're just one lonely guy sitting in burger king creating multiple accounts to sound important. In other words: NO CREDIBILITY.

The Christians need to unite against both, neither have been good for Lebanon. Just remember your identities are more valuable than money ok? You can see how Iran dumbed down the population with drugs and perverse agendas.

How was the Whopper by the way? Or did you go for the chicken royale?

the Saudis gonna accepted Hariri to meet with the Lebanese Patriarch !??? my bet in no...the Saudi gonna say that Hariri are in a "(...)in a reflective state,"...

tomorrow you are going to eat your own words, you filthy despicable troll.

but you said you are Portuguese and how would the Lebanese embassy help a shia Portuguese troll???

maybe they will put Al Rahi under house arrest too???

lol yes.... notice the plastic water bottle and the Patriarch is crossing his hands. Sure sign of house arrest. We want our Patriarch Back!!!!

al rah is trying to create a 'positive shock'.

But shocks are always bad for the faint-hearted!

the sick troll has endless resources:)