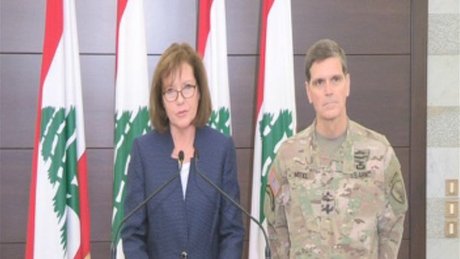 The United States on Wednesday announced new assistance to the Lebanese military including helicopters and other advanced military equipment.

The new assistance package was disclosed during a visit by the head of U.S. Central Command Gen. Joseph Votel to Lebanon on Wednesday during which he met with Prime Minister Saad Hariri, Defense Minister Yaacoub el-Sarraf and Army chief General Joseph Aoun.

She said the equipment will help the army "build on its steady strong capability to conduct border security and counterterrorism operations."

“We had an excellent conversation about the challenges facing Lebanon and the region. We also talked about how the U.S. and the broader international community can support Lebanon in these challenging times. Just last week, for example, the International Support Group for Lebanon met in Paris to recognize Prime Minister Hariri as a major partner in managing Lebanon’s unity and stability,” Richard added.

“The ISG drew attention to the Lebanese Cabinet’s reaffirmation of a policy of disassociation from conflict and regional wars, and it recalled Lebanon’s previous commitments under U.N. Security Council Resolutions, including 1559 and 1701,” she noted.

Votel for his part described the Lebanese Armed Forces as “professional, proficient, and focused on the Lebanese people.”

“We are extremely proud of their performance and very glad to be associated with them,” he added.

Washington has been a major supporter of Lebanon's army, and has provided more than $1 billion in military assistance to Lebanon since 2006.

According to a U.S. Embassy statement, the first program will provide the LAF “a rotary wing close air support capability through delivery of six new MD 530G light attack helicopters and associated equipment and training, valued at more $94 million.”

The third program will provide the LAF additional capabilities to employ joint fire support and close air support through the delivery of communications equipment, electronics equipment, night vision devices, and training, valued at more than $16 million.

The announcement of these programs “reaffirms the U.S. Government’s commitment to the Lebanese-American partnership and support of the Lebanese Armed Forces in their capacity as the sole defender of Lebanon,” the U.S. Embassy said.

He said the LAF had needed aircraft for close air support, precision targeting, and intelligence gathering and surveillance.

"It was also looking for a system that could operate at altitude -- such as Lebanon's frontier with Syria, which is well above sea level -- and that is reasonably easy to maintain and sustain," Nerguizian told AFP.

"The MD530G is intended to meet those requirements."

Lebanon received this year the first batch of six A-29 Super Tucano light attack aircraft from the U.S., which also announced it would deliver 32 infantry fighting vehicles known as M2A2 Bradleys to the LAF.

"Each provides a degree of sophistication and capability that far exceeds the LAF's mix of capabilities in the post-War period, and all of them are far more lethal than appearance alone suggests," Nerguizian said.

"Speaking from the Grand Serail on head of a delegation the ambassador stressed the need that all political parties adhere to the country's a policy of non-interference in regional conflicts"
.
with two millions of meca refugies!!!???

"Speaking after the meeting with Hariri at the Grand Serail, American Ambassador Elizabeth Richard said the package, valued at more than $120 million, includes six new light attack helicopters, six unmanned aerial vehicles and communication and night vision devices."
.
the helicopters and the material of comunication have incorporated eletronic material for Israel spy the activities of Lebanon Army...