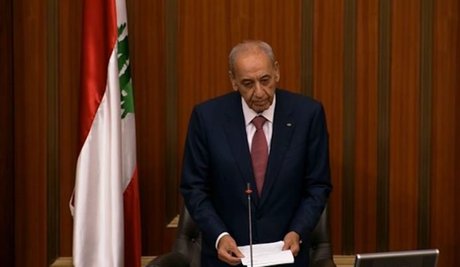 Speaker Nabih Berri has been re-elected for a sixth consecutive term on Wednesday with an overwhelming majority of 98 votes out of the parliament’s 128-seat assembly.

Berri, who ran unchallenged, won 98 votes with 29 blank ballots and one that was annulled.

The newly elected parliament convened for the first time after the May 6 nationwide balloting.

In accordance with the protocol, the Parliament convened under the most senior MP, Michel Murr, who was accompanied to the parliament by caretaker Prime Minister Saad Hariri.

The country's first parliamentary elections in nine years ended years of political stalemate over a new election law and repeated extension of the parliament's terms.

The re-election of Berri, an ally of Hizbullah who has held the post since 1992, reflects Lebanon's entrenched sectarian-based political system which has held despite rising discontent.

Together, the two parties hold all but one of the 26 Shiite-allocated seats in Lebanon's parliament.

After his election, Berri addressed legislators by saying "thank you" six times, in reference to his sixth term.

Lebanon in February signed its first deal to drill in a pair of offshore zones, including one that is disputed between Lebanon and Israel.

"Parliament will be a bulwark for the country's sovereign land and maritime borders -- a national response by the state, army, people, and resistance to Israel's aggressions and violations," Berri said.

Celebratory gunfire and firecrackers erupted across Beirut and its southern suburbs after Berri was approved.

Lebanon's confessional political system divides seats in parliament equally among Muslims and Christians, then further splits them among the various sects.

The position of speaker is reserved for a Shiite Muslim, while the other two top positions of prime minister and president go to a Sunni Muslim and a Maronite Christian, respectively.

Born in 1938, Berri is a veteran of Lebanon's complex political scene.

He rose to power as AMAL Movement leader in the civil war (1957-1990) before transitioning to politics when it ended.

He was simultaneously elected member and speaker of parliament in 1992. In his official role he calls and runs Lebanon's parliamentary sessions.

The long delay preceding this month's parliamentary elections was blamed on political divisions, the war in neighboring Syria and an unsatisfactory voting law.

President Michel Aoun will on Thursday consult the newly-elected body to name the country's next prime minister.

Al-Mustaqbal Movement leader, caretaker PM Hariri, is expected to return for another term in that role, his third time as premier.

This race to the abyss, political darkness, economic misery and Syria/Iran hegemony would never had happened without Aoun and his Don Quixote (and the hibernation of Cedar Revolution crowd). Though let us hope Aoun lives long enough so it is not this Assad/Basij parliament that will elect the next president. Can't get any lower than the abyss!

To be fair he did not say a "national symbol" for what.

"one that was annulled"
That was Paula's, unfortunately she'll have a hard time unless she acts strategically.

Ferzli always looked to me like he was created by Jim Henson.

Nusralot has 4 years to live, Berri and Aoun are prone to strokes. We’re slowly getting there.

Lol thats optimistic thinking SOS. those SOB's will probably outlive us all.

So at the end of the day around half the Aounis voted for, to quote Jebran Bassil, "Berri el-Baltagi".