Hizbullah Denies US Charges it Has Cells in Venezuela 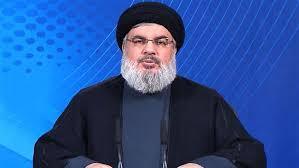 Hizbullah leader Sayyed Hassan Nasrallah has denied U.S. assertions that it has cells in Venezuela saying the Latin American nation "does not need them."

Nasrallah said in a speech Saturday that his Iran-backed group is in "solidarity with the political leadership and state of Venezuela against the American aggression."

Nasrallah added that his group does not have influence in Venezuela nor does it have cells operating there.

Venezuela has plunged deeper into political chaos following by the U.S. demand that President Nicolas Maduro steps down a month into his second term, which the U.S. and allies consider illegitimate.

U.S. Secretary of State Mike Pompeo said last week that "Hezbollah has active cells" in Venezuela and "Iranians are impacting the people of Venezuela and throughout South America."

are you Christian, abbas?

Great picture, this terrorist looks like an unwashed mafioso ( Huthi), and that's closer to his true character than the religious uniform he dishonored and desecrated for decades.

Wish I could comfort you by saying that your black bald Saudi killer mastermind has a better look! Lol

Hezbollah also denied having terrorists in Iraq, Syria and Yemen. So what's new. Lying is a way of life for this criminal.

They lied about blowing up the bus of Israeli tourists in Burgas, Bulgaria ... the Thai connection, plus the triple State drug dealers from the Iguazu region. They’re born liars and they practice very young with their takiyyism.

Terrorism against who? Innocent civilians like Saudi militias did in 9/11 ???

Lying and Deceit are fundamental to this terrorist's non-religion.

We have heard MBS and co. Lying all along the Khashoggi investigation... I think it's a common problem shared by all "Politicians" right? Lol

Nasrallah said in a speech Saturday that his Iran-backed group is in "solidarity with the political leadership and state of Venezuela against the American aggression."

The same leadership that bankrupted the country and starved its people.

And your statements and accusations against Maduro is certainly based on biased American Politician's opinion right? Very credible sources u got! Lol...

"The same leadership (Maduro) that bankrupted the country and starved its people." Said @justin Lol...