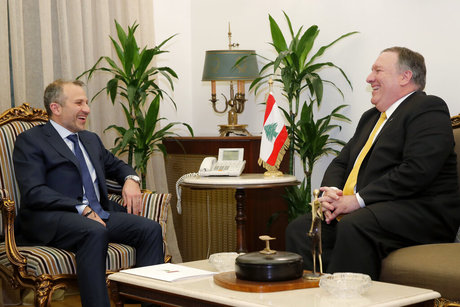 U.S. Secretary of State Mike Pompeo on Friday urged Lebanon to pick a side as he visited the country on a regional tour to build a united front against Iran.

He especially expressed concern over the role of Hizbullah, an Iran-backed movement that is targeted by U.S. sanctions but holds three cabinet posts in Lebanon.

"Lebanon and the Lebanese people face a choice: bravely move forward as an independent and proud nation or allow the dark ambitions of Iran and Hizbullah to dictate your future," he said during a joint news conference with his Lebanese counterpart Jebran Bassil.

"The U.S. will continue to use all peaceful means, everything at our disposal to choke off the financing, the smuggling, the criminal network and the misuse of government positions and influence," by Hizbullah, he said.

"We will not hesitate to call out those who actively and passively support those activities," he added.

Pompeo also accused Hizbullah of being an obstacle in the face of the Lebanese people's dreams.

“We believe that our work is already constraining Hizbullah's activities and we will continue to support Lebanon and its people,” Pompeo was quoted as saying during the press conference.

“It will take courage for Lebanon to stand up to Hizbullah's criminality, terror, and threats,” he added.

Pompeo also accused Hizbullah of putting Lebanon on the frontlines of Iran's proxy campaigns and of “stealing” the Lebanese state's funds.

"How does stockpiling tens of thousands of missiles in Lebanon territory for use against Israel make this country stronger?" asked Pompeo, referring to Hizbullah's arsenal that the group boasts can strike any part of Israel.

"Hizbullah and its illegitimate militia put the entire country on the front lines of Iran's misguided proxy campaign," Pompeo added.

Pompeo also referred to comments made by Hizbullah leader Sayyed Hassan Nasrallah earlier this month in which he urged supporters to donate money to the group.

Hizbullah's Al-Manar TV aired the comments made by Bassil live, but cut back to normal programming once Pompeo began reading his statement.

Bassil for his part said that Washington's designation of Hizbullah as a terrorist group is not binding for Lebanon and that all countries have an interest in Lebanon's stability.

“We appreciate the U.S. assistance for the Lebanese security institutions and we held a constructive and positive discussion based on the depth of the relation between the two peoples,” Bassil added.

“The Lebanese army is the guardian of stability,” he stressed.

“We discussed the issue of borders and we are seeking to preserve sovereignty and Lebanon has a chance to recover its rights without relinquishing any resources,” Bassil added, referring to the issue of demarcating the maritime border between Lebanon and Israel.

Separately, the minister called on U.S. firms to take part in tenders in Lebanon, noting that a “Russian-American” economic alliance can be reached in terms of economic projects in the country.

“We are committed to Resolution 1701 and stability on the southern border,” Bassil added as to the conflict with Israel.

"Hizbullah is a Lebanese party, not a terrorist group, and it enjoys a wide popular base," Bassil said.

"We don't want our ties with America to be affected and we want to work together to solve problems, including the issue with Hizbullah," he added, stressing that Lebanon's stability is of mutual interest to both states.

For someone who was forced to become a minister, Bassil looks extremely happy.

Bassil: We are committed to Resolution 1701 and stability on the southern border.

Who is this joker fooling? If that is the case what is hezbollah doing south of the Litani River? Why is it digging tunnels into Israel? Why are there still armed militias?

The only commitment that bassil has made is to his pockets.

Strange, because hezbollah has declared 'jihad' on corruption!

Pompeo Says Hizbullah Impeding Dreams of Lebanese but blablablablablablabla is helping young and virile Lebanese men achieve their dreams through the use of his deep and wide luv tunnel.

Hizbullah impeding the dreams of Lebanese, because Hizbullah has different dreams that are incompatible with the Lebanese culture