Army Scuffles with Protesters in Bid to Reopen Blocked Highways 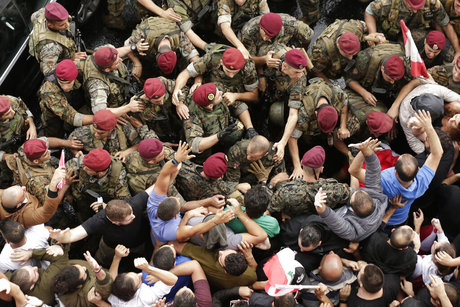 The army vowed to protect the protesters, but said roads have to be opened so that people can get on with business.

On Wednesday morning, troops moved in large numbers to open several major roads in the capital and other cities, facing off with protesters carrying red, white and green Lebanese flags. In some places, protesters refused to move away, leading to the scuffles. Thousands of soldiers deployed in Beirut and its suburbs, and in the southern cities of Sidon and Tyre to clear the roads. They were able to clear some and failed in other places.

The two sides were keen to avoid friction and not to clash. Some protesters were seen giving soldiers red roses, telling them their suffering is identical as they are both victims of corruption. Some soldiers were overcome by emotions and at least three broke down in tears.

The army is one of few state institutions that enjoy wide support and respect among the public as it is seen as a unifying force in the deeply-divided country.

The protesters in Jal el-Dib chanted the Lebanese anthem and songs dedicated to the Lebanese army as the troops tried to reopen the highway by force.

The troops managed to briefly open the main highway to the capital before it was blocked again.

Hundreds of army soldiers meanwhile set up a human wall in front of the demonstrators.

A stampede led to injuries among protesters.

Protesters chanted "peaceful peaceful" demonstrations. They raised their arms up -- a gesture the protesters agreed upon since the beginning of the demos -- signaling no aggression.

Demonstrators threw flowers at the soldiers emphasizing their moves will remain peaceful.

Schools, universities, banks and government institutions have been closed for the past week, as protesters blocked main roads and intersections. The closures have cut off the capital from the Bekaa region, leading to some shortages in foodstuffs and fruits and vegetables.

Hassan, 27, was brandishing a Lebanese flag as protesters blocked a main street into Beirut Wednesday.

The army removed barriers but the demonstrators remained, keeping the road closed.

Michel Khairallah, a young waiter, said people would "block the country until victory."

For him that means a new government "without corrupt ministers," made up of "young and competent people" able to finally move the country forward.

"They exist, they are just waiting for their turn," he said.

Fresh demonstrations were scheduled Wednesday from north to south of the country for the seventh consecutive day.

More than a quarter of Lebanon's population lives in poverty, according to the World Bank.

The country endured a devastating civil war that ended in 1990 and many of the political leaders are those that fought, often brutally, along religious lines.

The government is set up to balance power between multiple sects, which include different Christian groups, Sunni and Shiite Muslims, as well as the Druze.

But in reality it often entrenches power and influence along sectarian lines.

Embattled Prime Minister Saad Hariri presented a vast economic reform plan Monday, including the salary cuts, but it did little to assuage the demonstrators.

Lebanese media discussed a range of options for further measures including a government reshuffle and early elections.

The protests, which Lebanese politicians have accepted were spontaneous, do not have a specific leader or organizer.

A coordination committee of the revolution announced its formation during a speech in Beirut Tuesday, but it remains unclear how much influence it has.

A group of economists have offered their services to seek solutions.

Lebanon's economy has been sliding closer to the abyss in recent months, with public debt soaring past 150 percent of GDP and ratings agencies grading Lebanese sovereign bonds as "junk."

Fears of a default have compounded the worries of Lebanese citizens exasperated by the poor quality of public services.

YES sos... The first head to fall should be jeddo's!