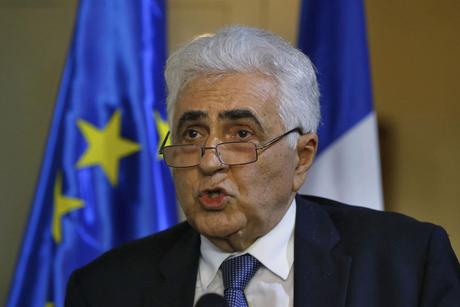 The resignation of Foreign Minister Nasif Hitti has deepened “distrust” in the government of PM Hassan Diab, aggravating the state of “diplomatic isolation” surrounding the “ruling authority as government and presidential term,” An Nahar daily reported on Tuesday.

Hitti’s resignation “exposed” Diab’s government and came as a “condemnation” against its policies, said the daily.

The government has struggled to implement reforms amid rapidly spiraling inflation and soaring unemployment and poverty, made worse by the coronavirus pandemic.

Hitti, who resigned Monday, said he had decided to resign “due to the absence of a vision for Lebanon ... and the absence of an effective will to achieve comprehensive structural reform.”

In spite of his brief resignation statement, he was keen to signal that the authority has failed to manage the crisis and implement the required reforms to save the country, added An Nahar.

In a stark warning, the Minister said Lebanon was turning into a “failed state” and urged politicians to rally around the country's national interest.

Nidaa al-Watan newspaper wrote that the resignation of Hitti is an “irrefutable confirmation” of the government’s “futility” to steer the country out of its crisis, while quickly driving it into a “failed state.”

"It is a blow to the political group that first named Hitti for the post of foreign minister. That is President Michel Aoun and the Free Patriotic Movement,” political sources commenting on the issue to al-Joumhouria daily.

Diab's cabinet was formed with the backing of Hizbullah and its political allies, including the Free Patriotic Movement, founded by Aoun.

Lebanese media cited several reasons for Hitti's resignation, including reports that he was displeased with how Lebanese officials were encroaching on his prerogatives and handling diplomatic ties.

Hitti's resignation comes after France's top diplomat Jean-Yves Le Drian during a visit last month scolded Lebanon's leadership for failing to move to save the country from collapse.

Hitti was reportedly sidelined from a meeting between Le Drian, Diab and several cabinet ministers.

That's what an honorable man does when surrounded by dishonest people... you shouldn't have accepted the position to start with!

I believe Lebanon will be better off when the constitution will change and equal (all inclusive,also political) rights for all Lebanese ,meaning religious leaders have nothing to do with politics, subsequently militia leaders will become obsolete . Lebanon of today is stil a product of the Ottoman feudal era, based on divide and rule approach, ensure that the population is dependant
of certain families and the latter are controlled by foreign powers, and as a result Lebanese people do not feel belonging to one nation. Since the independence all attempts to govern and manage were window dressing.

Excatly Geralt he took it knowing full well he would get paid well and a full pension on the backs of the Lebanese. He also knew fulll well that he was working for an Iranian government and not for the wellfare of Lebanon. Sahtien.