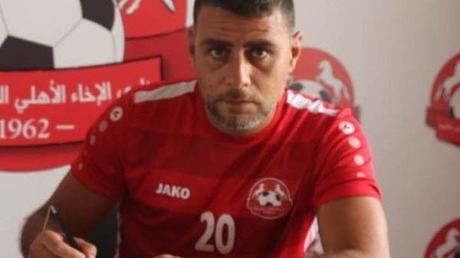 A prominent Lebanese footballer has died of a bullet wound sustained last month during a funeral for one of the victims of the Beirut port blast, his club said Friday.

Mohamed Atwi, 32, played as a midfielder for a number of Lebanese clubs and won the national league three times with Beirut's Ansar, his club for almost a decade.

"A sad day for sport... a great loss for Lebanese football," Wael Chehayeb, an official with his latest club Al-Akhaa al-Ahly, posted on social media.

Tributes poured in for the player, who was also capped three times for his country.

President Michel Aoun tweeted that "it is regrettable that international player Mohammed Atwi joined the list of young people that Lebanon lost because some don't know the dangers caused by their irresponsible behavior."

Those behind the shooting will face justice, Aoun added.

Caretaker Minister of Sports and Youth Vartine Ohanian tweeted that the nation was "shocked by the passing away of football star Mohammed Atwi." She added that Lebanon has lost "a humble and polite person and a symbol to civilized sports."

Atwi was hit in the head by a bullet as he walked on a street in a Beirut neighborhood last month.

Initial reports suggested he was struck by a falling bullet fired in the air from a nearby procession mourning one of the firefighters killed in the August 4 port explosion.

Atwi's family however has demanded a full investigation into the circumstances of his death, over which no arrests have been made.

Shooting in the air for celebrations and funerals is common in Lebanon despite recurring injuries from falling bullets.

RIP - There is sufficient video documenting the shooters. An investigation should determine the culprits and put them in Jail regardless of the circumstances and their affiliations. These irresponsible arm firing at all occasions should stop.

Good luck with that. Lebanon is a lawless society!!!

President Michel Aoun tweeted that "it is regrettable that international player Mohammed Atwi joined the list of young people that Lebanon lost because some don't know the dangers caused by their irresponsible behavior."

Seriously? The day this senile will pass to the other side we will be relieved from a bad card the devil dealt us!

Rest in peace Atwi, at least you won't have to live another day to witness the melting down of the Lebanese republic and the birth of an Lebanese Islamic Republic!