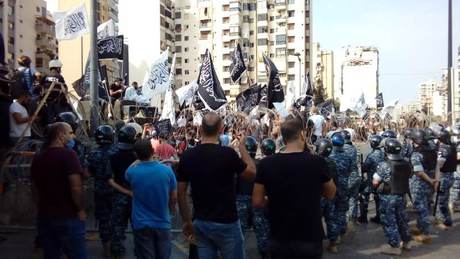 Protesters staged a rally near the French embassy in Beirut on Friday in protest against the French president's defense of the right to publish cartoons seen as offensive to Islam.

Protesters from different regions including crowds who emerged from mosques after Friday prayers, joined the demonstration near the Pine Residence -- the official residence of the French ambassador to Lebanon -- to protest insulting cartoons of Prophet Mohammed and French President Emmanuel Macron's stances.

The protesters found their way blocked by lines of police officers in riot gear. Waving black and white flags with Islamist insignia, the protesters activists cried, "At your service, oh prophet of God."

One protester at the demonstration, called by Lebanon's branch of the Islamist Hizb ut-Tahrir group, held a cartoon portraying Macron as a snake.

"France is in crisis because of Macron," read his sign in Arabic and French. "Islam is dear" to us.

Macron earlier this month described Islam as a religion "in crisis" worldwide.

Using smoke and tear grenades, security forces managed to push the groups away from the Pine Residence towards the vicinity of Barbir, reportedly making arrests.

Anger grew in the Muslim world over France's response to the beheading of a teacher who had shown his pupils cartoon images depicting the Prophet Mohammed as part of a class on free speech.

French President Emmanuel Macron has vigorously defended the publication of cartoons, sparking angry protests across swathes of the Muslim world and campaigns to boycott French products in a number of Arab countries.

Instead of calming things down, the imams are pouring gasoline on fire. Ignorant people that does not understand the value of freedom of expression, no matter how hurtful it may feel.

the best way to deal with insults is to ignore them, if you ignore them you win, if you get angry you lose.
" the one who angers you have conquered you".

BTW: freedom of expression is selective can be hypocrite, in the most civilised countries in Europe there are some subjects or events you can't question nor doubt and if you do you can go to jail.

what other religion will kill you if you leave?

a muslim who decides to leave Islam is sentenced to death in Islamic countries and if they live in the west they will be an outcast by their own family.

What Tolerance do they speak of?

lol @ the_roar from dahieh of australia

to the worthless troll calling itself roar:

A bunch of idiots. Where are those who claim that Islam is the religion of tolerance and fraternity ? Neither Macron nor the French people have insulted Islam. In fact 99% of the 4 million Muslims who live in France, agree with the official French position on these issues. How come not a single demonstration has taken place in France or Europe ??