Roads Blocked across Lebanon in Protest at Dire Situations 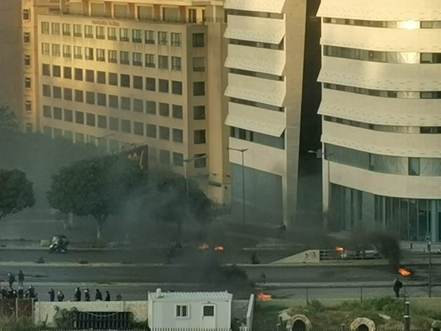 Protesters took to the streets Tuesday across Lebanon after the Lebanese pound hit a record low against the dollar on the black market and amid severe power cuts that have plunged much of the country into darkness.

In Beirut, the protesters blocked the key Ring highway that links the capital’s west to its east. They also blocked the nearby Beshara al-Khoury road, another vital route, and the Verdun highway. The road outside the Mohammed al-Amin Mosque in downtown Beirut was also blocked later in the day with burning tires and rocks, with protesters there denouncing the dire economic situation and the Lebanese pound collapse.

In the evening, protesters blocked the Saifi and Qasqas roads while the Corniche al-Mazraa road was re-blocked after it was briefly reopened.

"What is happening is unacceptable... People need to revolt," one of the protesters told a television channel in Beirut.

"There is no way to get back our dignity other than the street," another said.

The al-Msharrafiyeh road in Beirut's southern suburbs was also blocked.

On the capital’s southern outskirts, protesters blocked the old airport road, the Chatila-airport tunnel and the al-Assad Highway.

And on Beirut’s northern outskirts, protesters cut off the Dora-Nahr el-Mot highway with burning tires, obstacles and trash bins while the lane leading to Beirut was witnessing a severe traffic jam.

Protesters also blocked the country's main highways in Jiye, Zouk and Jal el-Dib and several roads in nearly all of the country's provinces, vowing that they will not leave until the departure of the ruling class and the improvement of the situations.

Elsewhere, protesters blocked the Riyaq-Baalbek road and the Taalabaya road in the Bekaa, the Elia roundabout in Sidon and the Hasbaya-Marjeyoun road.

Earlier in the day, demonstrators had blocked two key highways in the North.

Protesters in Chtaura and Sidon meanwhile forced money exchange shops to close amid a deployment of security forces.

The Lebanese pound hit a record low against the dollar on the black market on Tuesday, a sign of the country's multiple crises deepening with no prospects for a new Cabinet in the near future.

The crash in the local currency has resulted in a sharp increase in prices and a lack of hard currency has also led to delays in the arrival of fuel shipments, leading to more extended power cuts around the country, in some areas reaching more than 12 hours a day.

The dollar was trading at 9,975 Lebanese pounds around noon Tuesday. The previous record was registered in July, when the dollar briefly sold for 9,900 pounds on the black market. The official price remains 1,520 pounds to the dollar.

Lebanon has been hammered by one crisis after another, starting with the outbreak of anti-government protests against the country's corrupt political class in October 2019. That has been compounded by the coronavirus pandemic and a massive blast in Beirut's port last August that decimated the facility.

Lebanon has also been in desperate need for foreign currency but international donors have said they will only help the country financially if major reforms are implemented to fight widespread corruption, which has brought the nation to the brink of bankruptcy.

The drop in the value of the Lebanese pound also came after an end of February deadline for the country's banks to raise their capital after they were hit hard by the crisis. Local media reports hinted that some lenders had to collect hard currency from the black market, increasing demand for the greenback over the past days ahead of the Feb. 28, deadline.

"The dollar is equal to 10,000 pounds. People are hungry, prices are flying and there is no electricity," tweeted Lebanese business writer Hala Saghbini. "We want a government immediately. Enough humiliation of the people."

"They've driven us to begging; they're starving us," a protester said.

"We've been sitting at home for ages, then there was the port blast, and they haven't formed a government. We've had enough of this ruling class."

The crash in the local currency will throw more people into poverty. In Lebanon, the minimum wage is 675,000 pounds, or about $67 a month. Before the protests broke out in 2019, the minimum wage was about $450 per month.

The crisis has driven nearly half the population of the small country of 6 million into poverty. Over 1 million refugees from Syria live in Lebanon.

In December, the World Bank warned that Lebanon's economy faces an "arduous and prolonged depression," with the gross domestic product projected to plunge by nearly 20% because its politicians refuse to implement reforms that would speed up the country's recovery.

In March last year, Lebanon defaulted for the first time ever on a payment on its massive debt amid ongoing popular unrest. Lebanon's debt reached $90 billion or 170% of GDP, making it one of the highest in the world.

The Golden Days of the Strong President and his FPM party.......