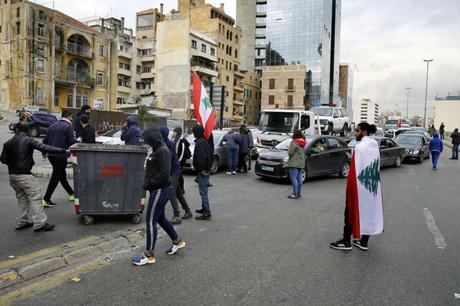 Protesters early on Monday blocked roads again across Lebanon protesting the dire living conditions and the country's political paralysis after the Lebanese pound hit record lows on the black market.

“Is it logical that Lebanese are fighting over milk, the dollar is 11,000 (pounds) and everyone has four or five children on their neck, including their parents. They (corrupt politicians) need to step down, aren’t they ashamed of starving their own people,” cried one protester.

Another protester said he was frustrated that other Lebanese were still sitting at home.

“Patriarch (Beshara el-Rahi) has urged us all not to stay silent about all this corruption and injustice. What are you doing at home? Lebanese should all leave their homes and join us on the streets,” he said.

Black smoke billowed up from overturned rubbish dumpsters and tyres set ablaze by protesters at various entrances to Beirut from the early morning.

The local currency continued its rapid collapse against the dollar, trading at nearly 11,000 Lebanese pounds on the black market for the first time in its history.

For days, angry protesters have blocked streets and highways across the country with burning tires for days, as the pound slid to record new lows.

The crash in the local currency has resulted in a sharp increase in prices as well as delays in the arrival of fuel shipments, leading to more extended power cuts around the country, in some areas reaching more than 12 hours a day. The crisis has driven nearly half the population of the small country of 6 million into poverty, wiped out savings and slashed consumer purchasing power.

In October, former Prime Minister Saad Hariri was named to form a new Cabinet but five months later, disagreements between him and President Michel Aoun on the shape of the Cabinet have stood in the way of a new government's formation.

Lebanon has also been in desperate need of foreign currency, but international donors have said they will only help the country financially if major reforms are implemented to fight widespread corruption, which has brought the nation to the brink of bankruptcy.