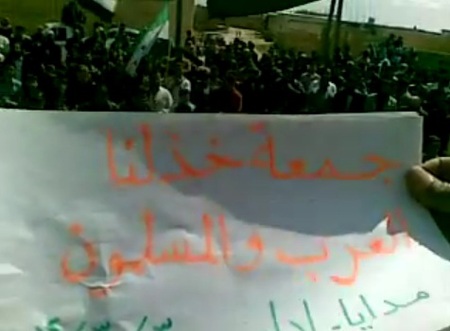 Deadly clashes raged and anti-regime protesters rallied across Syria on Friday to denounce the Arab League’s inaction in the face of a bloody crackdown on dissent after the annual Arab Summit only urged dialogue to resolve the crisis, as U.N.-Arab League envoy Kofi Annan urged the regime to immediately implement a ceasefire.

The Local Coordination Committees, the main activist group spurring protests on the ground, said security forces killed 45 people across the country: nine in Daraa, 14 in Deir al-Zour, three in Aleppo, 12 in Homs, four in Idlib, two in Damascus and one in Hama.

"The desertion of the Arabs and the silence of the Muslims are the hardest things facing Syrians," read a sign held up at a protest by hundreds of people in Kafaroma, in Idlib province in the northwest.

Protesters took to the streets despite a fierce assault on the Idlib town of Maaret al-Numan by security forces bidding to crush the year-old revolt against President Bashar al-Assad, monitors said.

"We will resist to the last drop of blood" and "Syria is bleeding," said other placards held up by protesters at Irbin, near Damascus, as seen in an activist video posted online.

Internet-based activist group The Syrian Revolution 2011, one of the main motors of the uprising, called for people to take to the streets after the main weekly Muslim prayers on Friday to protest against the Arab world's inaction.

"The Muslims and the Arabs have abandoned us ... but God is with us ... and our determination will carry us to victory," the group said on its Facebook page.

An Arab summit in Baghdad on Thursday, largely ignored by Gulf states, approved a resolution calling for an end to the Syrian regime's crackdown on dissent, for the opposition to unite and for parties to the conflict to launch a "serious national dialogue."

The opposition had urged a harsher statement backing hardliners Qatar and Saudi Arabia, who have called for Assad to step down and for rebels opposing his regime to be supplied with arms.

But Iraqi Prime Minister Nouri al-Maliki said that giving weapons to either side "will lead to a regional and international proxy war in Syria."

In Damascus, dozens of people rallied in the neighborhood of Kfar Sousa, braving the strong presence of security forces who shot at one group of demonstrators.

Protests were also held in the Damascus suburbs of Al-Hajar al-Aswad and Douma, where worshippers emerged from around a dozen mosques, reported activist Mohammed Saeed, who added that regime forces opened fire to disperse them.

Hundreds of people marched through the eastern city of Deir al-Zour, while protesters in the second-largest city of Aleppo chanted: "O God, we have only you to help us."

Activists in Syria have for more than a year staged anti-regime protests each Friday after the main Muslim prayers. They have been violently put down by Assad's forces.

The United Nations says more than 9,000 people have died in the revolt, which many fear has brought Syria to the verge of civil war.

On Thursday, activists blocked a street and burned tires in the al-Aassali neighborhood of Damascus to protest the "failure of the Arab League," according to a video posted on the Internet.

Annan's ceasefire appeal came as monitors said shells rained down on Homs, a main rebel bastion which has been the focus of much of the regime's year-long crackdown on protests.

"We expect him to implement this plan immediately. Clearly we have not seen a cessation of hostilities on the ground. This is our great concern," Annan’s spokesman said in Geneva, adding the "deadline is now" for Assad's regime to end all violence.

The plan calls for a commitment to stop all armed violence, a daily two-hour humanitarian ceasefire, media access to all areas affected by the fighting, an inclusive Syrian-led political process, a right to demonstrate, and release of arbitrarily detained people.

"I can't tell you what the next steps will be if they don't stop now," Annan's spokesman said, adding however that Annan was due to brief the U.N. Security Council on Monday and "we will take it from there."

Annan is also working to convince the Syrian opposition to "lay down their arms and start talking," he said.

State-run news agency SANA said on Thursday that "President Assad... has informed Annan that Syria approves the plan (the envoy) submitted but had made remarks about it."

Assad said he would "spare no effort" for the success of Annan's six-point plan but added that the proposal would only work if "terrorist acts" by foreign powers stopped.

On the ground, a sniper shot dead a civilian in Homs’ Khaldiyeh district, and two others were killed when their car was fired upon elsewhere in the province of Homs, said the Syrian Observatory for Human Rights.

Security forces set alight four houses during raids in Jarjanaz, near the town of Maaret al-Numan in Idlib province, where a sniper killed a 45-year-old civilian, it added.

At Irbin, near Damascus, a soldier was killed in an attack on a military checkpoint.

Fierce fighting was also reported in the provinces of Hama, in central Syria, and Deir al-Zour in the east, said the LCC.

In Saudi Arabia, U.S. Secretary of State Hillary Clinton was holding talks with Saudi King Abdullah on Friday in a bid to crank up pressure on Assad.

She is due to attend a meeting of the "Friends of Syria" group on Sunday.

"The main objective of this conference is to increase the pressure on the Syrian regime to end the bloody repression," a Turkish official said.

Turkey, Syria's northern neighbor, has been a vocal critic of Assad's deadly crackdown.

Prime Minister Recep Tayyip Erdogan said on a visit to Tehran that Syria should heed the will of its people by implementing political reforms and allowing free elections.

"The Syrian regime should be receptive to the will of its people, who want elections and democracy," the Turkish leader said, according to an interview aired on Iranian state television late Thursday.

"If (President) Bashar al-Assad is not afraid, and is confident about his regime, he should allow the formation of new (political) parties," Erdogan said.

Assad's Baath party controls political life in Syria, which many fear is on the verge of civil war.

Good luck Annan! Stop or else. If you do not have an "else" Assad will never stop.

the moment where the russians and the chinese will start really shifting their attitude towards this failed regime is getting closer.
soon they will side with the syrian people and appear like saviors, then push this regime to get out. :)

Morgan Freeman there is after something that is not there. Assad will NEVER act on Annan's proprosal. Assad even said that he wants a "comprehensive approach" that will include "drying up the areas where the terrorists are coming from". Well, that is the justification for using tank fire on civilian populations in Homs, Idlib, which is the Assad Plan.
Nothing will stop this guy except anti-tank fire and surface to air missiles.

The Russians kept you toothless for a reason Annan. He won't stop and you can't make him. He is a killer on a rampage.

If they request a stop to all armed violence, why do they need a 2 hours humanitarian ceasefire a day?

geha - have you gone mad? The majority of the Syrian people prefer assad!

beiruti, is it wrong for assad to want the united nations actually side by side in the planning of the stratagy ? i think its a good idea - infact the only people that will say its bad are the people that DONT want accountibility!