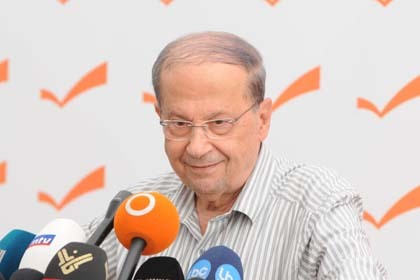 He said after the movement’s weekly meeting: “There is no desire to form a government or an initiative to facilitate its establishment.”

He said that foreign meddling may be thwarting the formation process, noting: “Free individuals are not subject to pressure and the slogan of ‘Freedom, Sovereignty, and Independence’ has lost its meaning because those in rule are not free.”

The MP accused President Michel Sulieman and Prime Minister-designate Najib Miqati of conspiring against the country because they are not exercising their powers in forming the Cabinet.

In addition, he held Miqati responsible for the ongoing crises in Lebanon, demanding that he present justifications for his failure to form a government.

“He has the majority and we want to know why he is obstructing the process,” he stressed.

“Moodiness is not a characteristic of a man of state,” Aoun noted.

“Miqati is unaware of the rules of the Cabinet formation as he should know that it should be comprised of the new majority,” stressed the FPM leader.

“Those who staged protests in Tripoli after the collapse of the previous Cabinet are conspiring with officials against forming the new one,” he added.

Addressing Hizbullah’s efforts to form a government, Aoun said: “No initiative has been presented.”

On Mustaqbal bloc MP Mohammed Kabbara’s call for solidarity with the Syrian people, he stated: “We have no interest in meddling in Syria’s affairs and interfering in its issues or any other Arab case is unacceptable.”

Regarding Sunday’s clashes at Maroun al-Ras, the MP described them as a “crime under U.N. sponsorship.”

“Israel’s crimes cannot go on and the resistance’s escalatory actions will reach a climax as there is an international conspiracy against Palestine,” he revealed.