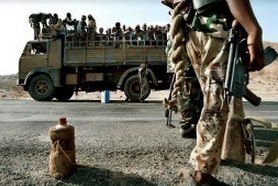 Eritrean army tanks besieged the information ministry in central Asmara on Monday after some 200 mutineers seized the building to call for political reform, diplomatic and diaspora sources said Monday.

No shots had been fired and the rest of the city appeared calm, the diplomats added, although very few details were immediately available.

"The ministry of information is under siege," a diplomat said.

Amanuel Ghirmai, an Eritrean journalist in Paris for independent Radio Erena, said that around a 100 army mutineers stormed the hill-top ministry -- which towers over the capital of the Red Sea state -- early on Monday morning.

They reportedly ordered news readers at the government-run television and radio station -- the only source of media for the authoritarian state -- to read a statement that they will implement the country's constitution.

The statement also reportedly ordered the release of prisoners of conscience.

"We do not know who is leading the situation... everybody has been put into the same room (in the ministry)," Amanuel said, adding that he had spoken to sources in Asmara.

Britain's foreign office updated its travel advice Monday to say it had received reports of "unusual military movements in and around Asmara", without giving further details.

The reports were not possible to confirm independently, and all calls to government officials were not answered.

Impoverished Eritrea beats even North Korea to rank last out of 179 countries on the Press Freedom Index of the Paris-based media watchdog Reporters Without Borders.

All independent media was shut down after Issaias launched a draconian purge in 2001, while the Horn of Africa nation expelled the last registered foreign correspondent in 2010.

However, Eritrean expatriates who had spoken to compatriots in Asmara said they could confirm reports that troops had been deployed at the information ministry, and that state television Eri-TV had stopped broadcasting, they told Agence France Presse.

All Eritrea's public media are recorded and broadcast from the ministry.

"The local transmission has been cut, the only satellite signal is airing some archives," Amanuel added.

"Local radio and TV appear to have been shut down; we are seeking further information," Britain's foreign office added.

Eritrean President Issaias Afeworki has ruled the Horn of Africa nation with an iron grip from independence in 1993, following an epic 30-year liberation war from neighboring Ethiopia.

Opposition parties are banned and those who challenge the regime are jailed without trial, often in the harshest of conditions.

After 15 top officials wrote an open letter in 2001 calling for democratic reforms -- dubbed the Group of 15, or G-15 -- Issaias launched a brutal political purge, jailing 11 and with the others fleeing into exile.

It left Eritrea effectively under the control of army, usually veterans of the decades-long independence war with Ethiopia, with government ministers mostly sidelined from the seat of real power.

Religious minorities are also persecuted in Eritrea, which is officially split equally between Muslims and Christians.

Late last year Eritrea's information minister Ali Abdu, one of the closest of a narrow elite around Issaias, was reported to have fled the country for exile abroad.

He is believed to have not returned to Eritrea after traveling to Europe in September, with many opposition reports -- including one closely connected to his family -- claiming he had fled to Canada.