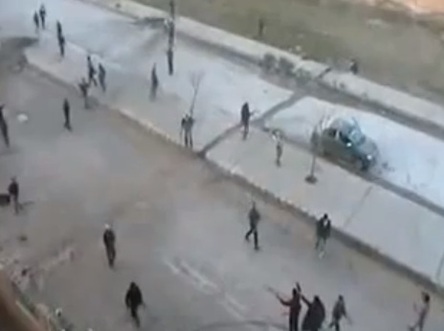 Syrian rebels launched fierce assaults on regime troops in several parts of the country Sunday, including near Deir Ezzor where they used tanks to shell an army brigade, a watchdog and activists said.

The rebels used tanks to shell Brigade 113 just north of the eastern city of Deir Ezzor, which they have surrounded for weeks, the Syrian Observatory for Human Rights said.

Brigade 113 and the besieged military airport of Deir Ezzor are some of the last regime holdouts in the city, whose province is largely held by the rebel fighters.

One rebel died in the attack on the garrison, as clashes raged in the city, the Britain-based watchdog said.

The opposition Deir Ezzor press network, a grassroots group of activists said that the humanitarian conditions in the province were dire.

"The western countryside is out of water and electricity supplies for the eleventh day in a row due to the indiscriminate shelling by the regime forces," it said.

Two weeks ago, the rebels captured the vital Siyasiyeh suspension bridge that straddles the Euphrates river in Deir Ezzor, cutting off the main regime supply route to the adjoining province of Hasakeh.

Regime troops have already been forced from the vast territory stretching from Deir Ezzor city to the Iraqi border, including the border town of Albu Kamal and its small military airbase.

In the northeast province of Raqa on Sunday, fighters from the jihadist al-Nusra Front and other rebel battalions took over an army company in Tabqa along the Euphrates river, securing a major cache of artillery and ammunition and taking control of a key checkpoint in the town, the Observatory said.

Rebels also continued their assault on Wadi Deif military base, a major regime holdout in the largely rebel-held northwest province of Idlib, while the army retaliated shelling the nearby town of Maaret al-Numan.

In the northern province of Aleppo four soldiers were killed and more than 20 wounded in a bombing by al-Nusra Front targeting a military building, the Observatory said without offering other details.

Clashes also erupted south of Aleppo city, when rebels attacked an army convoy headed to Safireh, where a cluster of defense factories are the last regime bastion in a city held by al-Nusra Front and other rebel battalions.

In the central province of Hama, five civilian guards of a cement plant were killed in an insurgent attack, only four days after 60 civilians, including 11 women, died in a bombing of a bus transporting employees from a military factory elsewhere in the province, the Observatory said.

The Observatory, which collects reports from a network of activists and medics in civilian and military hospitals on the ground, said that 125 people - 52 civilians, 29 troops and 44 rebels -- were killed on Saturday.

"Rebels continued their assault on Wadi Deif military base ... while the army retaliated shelling the nearby town of Maaret al-Numan." They learned these tactics from the IDF!

Ya lateef! May god have mercy on the innocents

and of course we beleive everything that observatory of Human rights in Syria says
Can anyone tell me who the hell this organization came from, because if you check UN websites, there is no such organization

Yea, the whole "observatory" for all of Syria... Is one guy... In britain.

It is a vast network of activists on the ground that report to one body. You ate wrong there