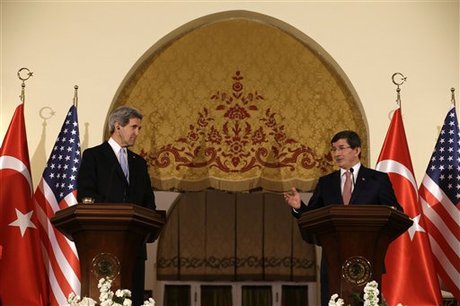 "Obviously we disagree with that, we find it objectionable," Kerry said at a joint press conference in Ankara, referring to a speech delivered by Erdogan that likened Zionism to fascism and anti-Semitism.

Kerry said he would raise the issue "very directly" with Erdogan and express Washington's hopes to see the two "vital allies" work together.

The top U.S. diplomat's visit came a day after Washington announced that it would for the first time provide direct aid to Syrian rebels in the form of food and medical supplies as well as $60 million in extra assistance to the political opposition.

But the discussions were overshadowed by renewed tension between Turkey and Israel, two major Washington allies, following comments Erdogan made earlier this week at a U.N.-sponsored forum in Vienna.

"As is the case for Zionism, anti-Semitism and fascism, it is inevitable that Islamophobia be considered a crime against humanity," Erdogan said on Wednesday.

Kerry said it was essential for Turkey and Israel to rekindle their "historic cooperation" but the situation got more complicated "in the aftermath of the speech that we heard in Vienna."

"We have never made any hostile remarks against any nation," Turkish Foreign Minister Ahmet Davutoglu said in response to a question over Erdogan's remarks.

"If you want to talk about hostile you can call Israel's attitude that, after it killed nine civilians on high seas," he added.

"If some countries acted in a hostile way against our citizens' right to life, allow us to reserve our right to make a statement."

The incident strained bilateral military and diplomatic ties and left Washington in a bind to mend relations between its two fundamental allies in the region.

Erdogan's comments were branded as "a dark and mendacious statement," by Israeli Prime Minister Benjamin Netanyahu while Washington said "characterization of Zionism as a crime against humanity... is offensive and wrong."

A U.S. official traveling with Kerry on his first trip abroad since taking over as secretary of state from Hillary Clinton said Washington was "dismayed" to hear Erdogan's remarks.

"This was particularly offensive frankly," said the official who requested anonymity.

As part of their agenda, Kerry and Davutoglu also discussed the two-year civil war in neighboring Syria which has killed at least 70,000 people according to the U.N.

"There is no legitimacy in a regime that commits atrocity against its own people," Kerry said.

Turkey, once a close ally of Syria, has joined the US in its campaign to oust the regime of President Bashar Assad and has given shelter to Syrian rebels and to nearly 200,000 refugees along its volatile border.

In January, the United States began deploying Patriot missiles, along with Germany and the Netherlands, as part of a NATO mission to protect Turkey from any spillover of the Syrian conflict.

Turkey had requested the measure after several cross-border shelling incidents, including one in October that killed five civilians.

Kerry also attended a memorial ceremony in Ankara, in honor of the U.S. embassy guard who was killed in a February 1 suicide attack claimed by the fiercely anti-U.S. Marxist group the Revolutionary People's Liberation Front (DHKP-C).

Also on the agenda during the talks was Washington's pressure for increasing sanctions on Iran over its disputed nuclear program.

Turkey says it is bound by only U.N. sanctions against Tehran imposed by the United States and the European Union.

The situation of jailed journalists in Turkey -- which has more imprisoned reporters than any other country in the world -- was also expected to be raised by Kerry.

If Zionism is a crime against humanity, which it is, then why do you still have political and economic relationship with the Zionist terrorist state? Erdogan is an Ikhwan. They are all talk!

"Zionism" remains the best blame deflector for those who murder their own people and steal their national wealth.

Most of the Dictators who do that are ALLIES of Zionist America.

we dont want ure kind in lebanon, simple as that. i have the right to be anti zionist and semite and anti whatever i want to be, im free arent I, get out, zionists are greedy perverted parasites

Kanaan - I have no issues with cultural zionism (ie, the revival of jewish culture and identity). However, Zionism as practiced by Israel is beyond fascism. It practices severe forms of discrimination, ethnic cleansing, oppression and robbery of Palestinians land and property

Your claim that"being anti-Zionism would mean to kill 6 millions or Israeli Jews" is nonsense. I means that you do not believe that Israelis have the right to continue to deny millions of non-jews (in this case palestinians) their basic human rights to a home they were driven from. It can also mean that you believe in a pluralistic democratic and just country with no discrimination - something that zionism as practiced in israel does not allow for.

So, we are now to believe that the Turk butchers are dealing with diplomacy with "clean hand". Who are they to criticize other nations and/or societies misconduct, if they do not step up to the plate and take their punishment, pay restitution to the Armenians as the "now" civilized Germans did and still to the most part.

Settlements are an integral part of Zionism and a clear example of this dangerous ideology that believes in the supremacy of one race over others and resorts to genocide, terrorism, and theft to cleanse those with an undesirable religion.
Lebanon have a huge issue with Israel with 400000 Palestinian refugees living in exile while there villages have been erased from maps and billions of dollars worth of land have been confiscated and sold off to Europeans.

ALL people have a right to self-determination. Zionism is a form of western Colonialism. You do not have the right to go to another land, colonize it, and ethnically cleanse its natives just because 2000 years ago people of the same religion lived there (especially in the 20th century when colonialism was suppose to end). There is a BIG difference between national liberation movements against western colonialism and the colonizers. I am not saying that the Jews in occupied Palestine should be kicked out of the land. I am saying that the rights of the indiginous people MUST be restored like in Zimbabwe and South Africa.

@bigjohn: If this is the case, than the Jews who lived in this area for 3,800 years are the legitimate owners of the land (Where did Abraham, Moses, Jesus live? in Europe). So if the Syrians came to your house, kicked you out and occupied it for a while, and you went out and brought some friends and kicked them back out and reclaimed it, would that make you occupying their house? The fact is that during the Islamic expansion into west Africa, Salah Eddine managed to force the Jews and the Christians out of the Area and laid claim to it, does not make it his house. it is a known for a fact that the Jews and Muslims are so much alike, so rational thoughts cannot prevail. The only solution is to have 2 states, one for each sect. and lets hope than they can live peacfully next to each other.
Salam & Shalom.

I did not forget about the secret dealings with Iran. Now compare that with the Arabs who take orders from the Israeli lobby in Washington?