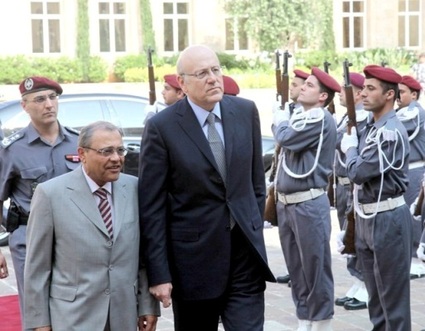 Prime Minister Najib Miqati, who on Thursday entered the Grand Serail for the first time in six years, reiterated that his cabinet will not confront the international community.

“Lebanon is not in a confrontation with the Western community nor the international community,” Miqati told pan-Arab radio station Sawa.

According to Miqati, Lebanon is facing economic and social challenges and ways to confront them.

“Based on what we’ve heard from foreign western countries, they will judge the cabinet over its actions. They are not concerned with local issues,” he told Sawa.

Asked about comments that the life of his cabinet was linked to Syrian President Bashar Assad’s tenure, Miqati said: “No one can say how long this cabinet would live. This is a Lebanese government that would stay (in power) if we were able to draft the policy statement and receive parliament’s vote of confidence.”

“I only follow the Lebanese constitution and my allegiance is only to my nation and citizens in this nation which is strongly in need for the minimum (effort) to improve living conditions,” the billionaire businessman said.

Miqati emerged as a leader in the wake of ex-PM Rafik Hariri's murder, when he headed a three-month interim technocrat government in 2005 during the worst political turmoil to grip Lebanon since the 1975-1990 civil war.

The 55-year-old magnate first entered local politics in 1998 and was last elected to parliament in 2009 as an ally of ex-Prime Minister Saad Hariri.

Miqati, who hails from the Sunni bastion of Tripoli in north Lebanon, was first appointed minister of transport and public works in 1998.

His nomination by the Hizbullah-led alliance in January this year to form the cabinet sparked a resentment by Hariri who along with the March 14 forces accused him of turning against them and allying himself with the Shiite party.

Born on November 24, 1955, Miqati is a graduate of the American University of Beirut's business school and also studied at the prestigious universities of INSEAD and Harvard.

He is married with three children.

Lebanon has made in 2006 a commitment to abide by UNSCR 1701 which stipulates among other requirements..:
"...full implementation of the relevant provisions of the Taif Accords, and of
resolutions 1559 (2004) and 1680 (2006), that require the disarmament of all
armed groups in Lebanon, so that, pursuant to the Lebanese cabinet decision of 27 July 2006, there will be no weapons or authority in Lebanon other than that of the Lebanese State;..."

UNSCR 1701 is what brought peace back to Lebanon and saved it from more destruction and death. While Hezbollah's leaders were hiding the lebanese were left to suffer the ravaging Israeli retatliation.
Is Miquati capable of fullfilling this commitment?

When you look around the room at your first cabinet meeting, all I can say is Good Luck Pal with that attitude. You will have a vote of one, yourself.

Laurel & Hardy ! WHo is who ! anybody knows the short guy ?

Dont you think the Honor Guard needs training .. I thing they were trained and deressed in Syria , during the honeymoon between Rafik Hariri and the Syrian régime that time ... Poor Lebanon .

Any Lebanese Sunni is better than the Saudi Hariri or any Hariri . Welcome and good luck to PM Nagib Mikati .