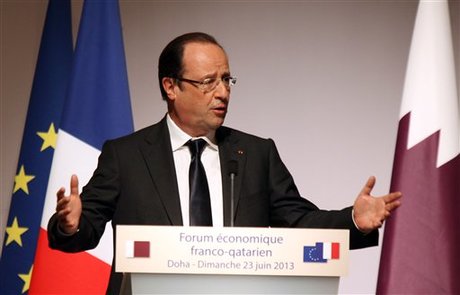 French President Francois Hollande warned on Sunday that Hizbullah's intervention in Syria will “definitely have repercussions on the fragile balance in Lebanon.”

“The party’s activities in the Syrian war will definitely have repercussions on Lebanon’s fragile balance,” Hollande told reporters during an official trip to Qatar.

He also voiced support for President Michel Suleiman's efforts in preserving the balance "based on non-intervention in the Syrian conflict and thus the return of Hizbullah (fighters) back to Lebanon."

Lebanon, despite an official policy of neutrality on the Syrian conflict, has been increasingly affected by the violence.

Suleiman has urged Hizbullah to end its participation in the war.

Activists and opposition fighters have said Hizbullah forces are now deploying elsewhere in Syria, including in the north, where the government has vowed an offensive in Aleppo.

Where did he come from..... He should be arming the Syrian rebels. Once they're done with their shai7a, they can come and help us get rid of our shabi7a. Not sure Israel would be happy....

Oh please, we've seen time and time again that rebels are perhaps at best marginally better than the present government in Syria.

They were so confident in retaking the government in a matter of months and look at the mess that is the Syrian 'revolution'.

Time for both sides to SIT DOWN and discuss things. It will make way for Hizbullah to return to Lebanon, senseless death and destruction to stop, and allow for the amelioration of the region. Is that not what is wanted ? Why the delay then ?

Hizbullah's presence is a secondary issue. The primary one is SYRIA. Solve that instead of addressing secondary issues (btw, it's not by ARMING people that one stops wars(well it is, but rarely and with consequences far beyond the scope of anyone))

Of course, it will. It already did! Just look at the fragile-brained Sannis. THEY HAVE GONE BERSERK. allahou BOOM akbar.