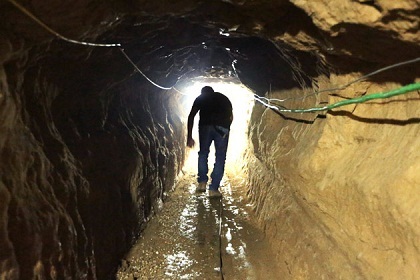 Egypt's security forces seized 20 Grad rockets being smuggled in from the Gaza Strip through a tunnel by militants in northern Sinai, security officials said Friday.

The rockets, along with their launch pads, were seized late Thursday after a firefight between security forces and militants in the town of Rafah bordering the Palestinian enclave, they said.

The Palestinian Islamist movement Hamas in Gaza has been pounding central Israel with rockets, while an Israeli air war on the enclave has killed 100 Palestinians since Tuesday.

Tunnels under the town of Rafah are used to smuggle food, fuel and consumer products into the densely-populated and Israeli-blockaded Palestinian enclave.

Hamas and other militant groups reportedly use secret tunnels to bring in arms and money.

In March, Egypt's military said it destroyed 1,370 smuggling tunnels under its border with Gaza, as Cairo's ties soured with Hamas after the ouster of Egyptian president Mohamed Morsi last July.

Morsi belongs to the Muslim Brotherhood to which Hamas is affiliated.

On Friday, Egypt closed the Rafah-Gaza crossing, a day after opening it to take in Palestinians wounded in the Israeli air strikes.

An Egyptian official said Israeli air raids prevented Palestinian ambulances from reaching the crossing in safety. It would be reopened on Saturday.

The crossing is usually closed, with Egyptian officials citing the tense security situation in Sinai where the army is battling an Islamist insurgency.

Rafah is Gaza's only border crossing that bypasses Israel.

Don't think that Gaza smuggling rockets into Egypt will make Sisi more willing to assist Hamas. But maybe giving Egypt or the PA control over the rockets in Gaza can be a solution to the conflict. Now that Hamas and Fatah are united it makes sense for the central PA government to control military equipment.

"Tunnels under the town of Rafah are used to smuggle food, fuel and consumer products into the densely-populated and Israeli-blockaded Palestinian enclave."
Last time I looked at a map, Rafah was on the Egypt (not Israel) - Gaza border, so if there is a blockade it is an Egyptian one, otherwise there would be no need for tunnels.