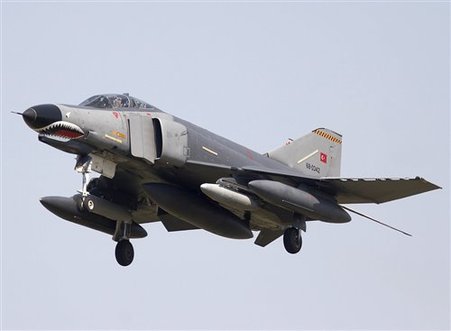 Turkey searched for a missing fighter-jet and held an emergency security summit Friday, as the prime minister backed off reported comments suggesting Syria had downed the aircraft.

The military plane -- reportedly an F-4 Phantom with two pilots aboard -- lost radio contact and vanished off radar screens around 0900 GMT over the eastern Mediterranean, near the border with Syria.

Prime Minister Recep Tayyip Erdogan, whose government has had tense relations with Damascus amid the uprising there, met military and intelligence chiefs and key ministers for the security meeting.

He said "an exact explanation could be issued after the summit".

Earlier, local media had quoted Erdogan as saying that Syria had apologized over the fighter jet crash, in a comment that suggested it had downed the plane.

"Syria immediately offered a very serious apology for the incident and admitted it was a mistake," the Haberturk daily newspaper quoted Erdogan as saying onboard a plane on his way back from Brazil.

"At this moment the air force and navy are conducting search and rescue operations in the eastern Mediterranean, and luckily our pilots are alive, we have just lost a plane," he reportedly told the daily.

However, at an Ankara press conference, Erdogan said: "I cannot say it was shot down. It's not possible to tell before we have exact information," adding that the details would be clarified after the summit.

Erdogan said he did not have "exact information" but that the meeting would reveal "if Syria really apologized and, if so, why it did".

The prime minister said he had been told that the plane was eight miles (12 kilometers) off the coast in the south of Turkey's Hatay province, close to Syria's Latakia.

"Four gunboats, helicopters and Syrian gunboats are carrying on the joint search," to locate the plane, he said.

Earlier in the day Turkey's military command announced it had lost radar and radio contact with one of its aircraft near Syria.

The plane took off from Malatya airbase in the southeast at 0730 GMT and lost communication with the base at 0858 GMT, the online statement said.

Malatya governor Ulvi Saran told the Anatolia news agency that the aircraft was a F-4 fighter jet with two pilots onboard.

"We have no information right now about the fate of the plane. We are following the developments," he said.

NTV private news channel reported, citing unnamed military sources, that the plane crashed in Syrian territorial waters, and that there had been no violation of the Syrian border.

But the claims were not confirmed by Turkish officials.

Meanwhile, a witness told Russia's RT Arabic television that the Turkish plane crashed on Syrian territory and the two pilots were captured, adding that the jet appears to have been shot down.

For its part, Lebanon’s al-Jadeed television quoted “Syrian sources” as saying that “Syrian anti-aircraft artillery opened fire last night at hostile planes over the Latakia area of al-Badrousiyeh, downing one of them.”

Turkey’s Hurriyet newspaper, without citing sources, said the plane apparently plunged into international waters outside the territorial waters of Syria.

Maybe it is a defector from Turkey. lol

I hope the syrians shot him.
That will be a good execuse for Turkey to invade Syria and get rid of the butcher

Is that the real picture of the vanished plane ?

What type jet was it? Was it the Tornado(as depicted in the picture on the article) T.A.F. Doesn't operate Tornados. Their fighters are only the F-4, F-16 and F-5. Besides, why would Turkey be sending Fighters to Syria? And more importantly, why is Syria just shooting down the jets? It doesn't make any sense. If anyone finds out what type of jet, please let us all know, Thanks ;)

Nevermind, find out it was a F-16. (Not sure why they put a picture of a Tronado on the article then)

The photo above is an F-4 with Turkish markings (perhaps it was of a Tornado earlier and has been updated, in which case I apologize for the erroneous correction). Early reports alleged an F-16 went down, but these reports also claimed that the jet crashed on land, which at this moment seem to be false. Turkish officials are claiming it was an F-4, and even if Turkish officials are withholding information at this time due to the sensitive nature of the situation, they have no reason to falsify the model of the missing aircraft.

They just called me and told me it was F-4.

the picture shows a phantom,F4.

“the two pilots were found alive in the Mediterranean, eight miles away from the Syrian territorial waters.” so it went down in the Med, so much for Syrian heroics but nice try.

"Two pilots" sounds like F-4 Phantom (pilot plus weapons officer). F-16 and F-5 only have one person on board.

That area have very strong bird presence and there are records about bird strikes. Some villagers claim they've seen flocks of storks in the area.

There is also an unconfirmed report about two pilots are found and alive.

As for the claims about a shot down, shooting down a Turkish aircraft may trigger an article 4 NATO response, so it does not make sense.

F-4 for sure and most probably an RF-4, which is the unarmed recon version.

it was F-4E Phantom.

this is an F-4 picture (as stated in the article), Toronado's engine- intake is totally different....

it is defenitly not an f16 ,its a phantom f4

"Malatya governor Ulvi Saran told the Anatolia news agency that it was an F-4 plane with two pilots onboard, without elaborating further."

manzoumit el dife3 el jaouy el sourieh radars , hq , command and control
were spoted by the west so all of these will become primary and first target if the offensive on syria beggins

if the Syrian used anti air missal im 100% sure the pilot should of known about it and that's why they aboard the plane,but that's weird bc the Radars could of captured the missiles,unless its an S400 which i doubt Russia gave that to Syria,Iranians been begging Russia for that,its a missiles that even the radar cant detect it.but probably they did, its a message to West or something,unless it was a Russian sub that shut it down.but that's impossible,why would Syrian apologies.

@Flamethrower: If you knew anything you would know that the Tornado is more modern than the F-4 (which was used in the Vietnam war)

Reported shot down by Syrian military. the syrian army must be loosing their mind, now they are messing with Turkey. its time to start pounding these aholes down and teach them a lesson. start sending cruise missiles and destroy all of assad's miltary infrastructure

Why don't you grab a weapon and a flight to Syria and show them who's boss...

Nice work Syria of trying to bring NATO into it--Russia may have to sit back now and get out of the way because Syria brought this on themselves--can't blame "terrorists" or rebels on this one.

God bless you. What a genius. Tell me something, will Assad definitely fall in 2012 as Dr. Kherfen Wmouderyen predicted yesterday? Time is running out. But hey, there is no tax on predicting, oh great gurus.